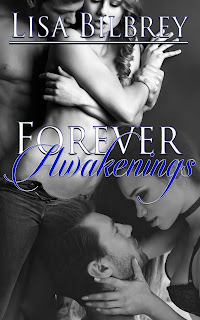 Elle Davis has spent the last six years living the dream with Sadie, Derek, Callum, and their two adorable daughters. She’s brought Davis Architecture and Design to new heights with fresh, new technology and a growing client lists. Her relationships with her family has never been stronger, and for the first time in her life, Elle has hope for the future.

Yet in a moment, everything changes. Elle finds herself fighting for her life, leaving a trail of causalities in her wake. Does the past ever really stay in the past? Can true love conquer pure evil? Will Elle find her forever awakening before it’s too late?

Lisa Bilbrey's "Forever Awakenings" is the third tale in the Awakenings Series. Plenty of sexy MMFF sex. Holy death threats, Batman! A lot of really serious drama and obstacles for the family to overcome this time! A very tangled web that brings back stuff from the first book. I'm not sure what Lisa Bilbrey will write next, but I will be reading it!


Genre: Erotica, Polyamory
Content Warning: Over 18. Graphic Sex between M/M and F/F, as well as M/M/F/F 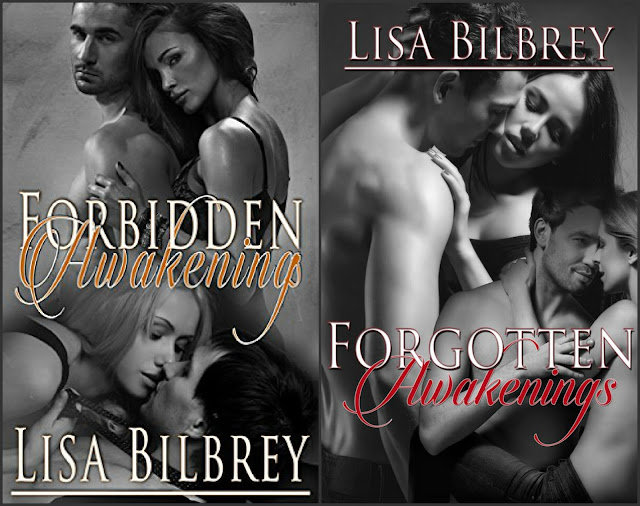 Elle Reid and Sadie Williams are best friends, turned lovers. Always considering themselves to be friends with benefits, they opt to let loose and celebrate after landing a high-profile project with the best architecture firm in San Francisco.

Callum Davis and Derek Flores have been best friends since their first year at UCLA. While they've admitted their attraction to each other, neither have the courage to act on their feelings, both fearful of losing their friendship. At least, not until they meet Elle and Sadie at Club Venom.

Elle, Sadie, Callum, and Derek embark on a life-changing journey that defies what society tells them is normal. But when you find yourselves in love with multiple partners, how do you choose? And what will happen when their families find out about their unconventional relationship? Is their forbidden awakening worth unraveling the secrets they've been keeping?

“It works for us,” he chuckled, closing the door behind him and Callum.

Gasping, Elle realized just want he meant. “We’re working on this project with the two of you?”

Callum glanced at her with a frown. “Did you not know that after we came into the meeting?”

“No, I assumed that you and Derek were a part of a committee or something,” she grumbled, wondering if they’d made a mistake by signing the contracts without considering all their options.

“Dad makes those decisions on his own since it’s his project.” Callum’s tone slow and careful, and Elle felt like an even bigger fool.

“Is it going to be a problem? Us working together, I mean?” Derek asked, but before she could respond, Sadie spoke.

“No, of course not.” She gave Elle a look that meant they’d talk about it later. “So, which desk is mine?”

Derek looked from her to Elle and back before he smiled. “Whichever one you want, honey.”

“I’ll take this one.” Sadie walked over and slid her hand across the desk closer to the window, and looked over at Elle. “Is that okay with you?”

Elle nodded, unable to say anything more. A sickening feeling washed over her, and she couldn’t stop herself from thinking about Leo. The difference between now and then, of course, was that Elle wasn’t a naïve college girl, but there was more than just her education on the line. Her career was in jeopardy.

“Well, this is awkward.” Callum sighed, placing his hands on his hips. “It’s clear that the four of us need to . . . discuss our relationship, so why don’t we have lunch together? My treat.”

“Sounds good,” Sadie agreed before turning her attention to her. “Elle?”

Biting on her bottom lip, she shifted her eyes from Sadie to Derek, and then onto Callum. “I guess we do need to talk, and I’d rather not do that here at the office, so lunch is fine, but I insist on paying for me and Sadie.”

Callum looked like he was going to protest, but then nodded. “Okay, it’s a date.”

Lisa Bilbrey's "Forbidden Awakenings" is the first tale in the Awakenings Series. This is a hot M/M/F/F polyamory tale. Lots of hot sexy combos. I think the M/M stuff was my fave. Family drama and stress infused with lots of sexy lovin'. Ha - and they work together! I can't wait to read #2.

Two bullets — one just under her right breast and the other in the middle of her left leg. That’s all it had taken to destroy Elle Reid, to leave her weak and useless. Just two little bullets.

Elle gave into her desires and allowed herself to love. The road to redemption hasn't been easy for her, or her lovers, but together, she, Sadie, Callum, and Derek strive for a life of peace and harmony. But will they get their happily ever after, or will a madwoman's quest for revenge shattered their dreams?

Lisa Bilbrey's "Forgotten Awakenings" is the second tale in the Awakenings Series. Once again, a lot of high drama and sexy sex. This MMFF relationship matures and has babies and stay-at-home dads, but that doesn't put a damper on the lovin'. A must read if you are into polyamory tales. This one is even better than #1!

Elle hummed, but didn’t say anything else. She was being ridiculous. Callum would never hurt her on purpose, and she was being silly.

Callum sighed and pressed his lips against the side of her neck. “I worry about you.”

“I’m fine.” The words were hollow and fake, filled with an emptiness that she couldn't deny because she was anything but fine.

“So you say, but yet, I can tell that you’re pissed,” he argued, keeping his lips firmly against her skin. “Please, just talk to me.”

Her lips trembled. “I don’t know what you want me to say,” she whispered, shocked by how vulnerable she sounded.

“Why didn’t you join us this morning?” he asked.

“I miss touching you.”

“I miss you touching me, too,” she admitted, and guilt filled her. She was losing him, losing all three of them, and all because she couldn’t let go of her anger.

Callum slid his hand around to her stomach, flattening his palm before slipping it into her pants. As his hand traveled south, Elle’s breathing became thick and she struggled to keep from turning to goo.

“Can I love you?” he whispered.

“I . . . I . . .” She trailed off, but before she could say anything more, the door to the kitchen opened and she pulled herself out of Callum’s arms as Derek and Sadie stumbled inside. They were laughing as they shifted their attention from her to Callum and back, their smiles slowly floating away. “Sorry. I . . . I . . .”

Once more, she trailed off as she stumbled across the kitchen, pushed her way between Sadie and Derek, and out of the kitchen. Her heart was racing as she hobbled across the room to the stairs. With tears burning inside her eyes, she attempted to go upstairs, but just as she placed her foot on the fifth step, her leg gave out on her and she fell. A loud scream erupted from her chest as she hit each step, before finally stopping on the cold, hardwood floor.

Obsessive, compulsive, slightly crazed, but enough about her personality. First and foremost, Lisa Bilbrey is a mom to three and a wife to one. She loves to write, and spends the majority of everyday writing. It's who she is, and what she's meant to be doing. Words are her life, the air she breathes, and the nutrients of her soul. Finding a love in the written word, Lisa Bilbrey started writing as a way to express herself and let her voice be heard. From the first word she wrote, she'd found her heart and soul.

Always willing to learn, she's spends much of her time trying to improve as a storyteller.