Showing posts from January, 2017
Show all

Review for Plus One by Missy Blake

Today we’re having the blog tour for Plus One by M.N. Forgy writing as Missy Blake. I am so excited to bring you this sexy contemporary romance! Check it out and be sure to get your copy today!Title: Plus One Author: M.N. Forgy writing as Missy BlakeGenre: Romantic ComedyAbout Plus One: No feelings. No lies of calling the next day, and no empty promises of not banging anyone’s mother. If I could act like I’ve never met a set of twins I screwed on the same night, thinking they were the same person, then I could do this. It was the perfect set up for a fake relationship and it was simple. We faked our smiles, we faked our laughs; hell, we even faked our love. It wasn’t real. But that kiss was anything but fake, and the orgasm was anything but pretend.   Somehow my plus one had become more, and now I’m standing here with my underwear around my ankles wondering what in the hell to do next.

Missy Blake's "Plus One" is a great read. Rae is having a …
Post a Comment
Read more 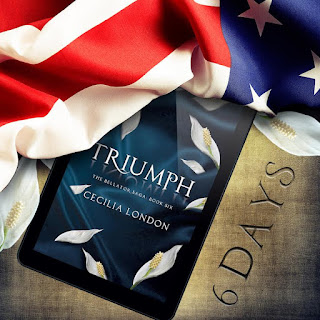 The end is almost here, the final book in the Bellator Saga is coming in 6 days! Triumph by Cecilia London releases on February 6, 2017. #EpicRomance #ItAllEndsHere #BeFearless
“All of your ideals, your hopes and dreams…they cease to matter if you abandon them in your darkest hour. We have to see this through to the end.”
Jack McIntyre and Caroline Gerard have never shied away from a challenge. As dual commanders of the American rebel forces, they now face the greatest adversity of their lives. Every decision has permanent consequences. Relationships are tested and restored. Hard truths come to light. When the reality of their situation finally hits them, there is one thing they know for certain.
No sacrifice is too great for love.
══ Pre-Order NOW ══ iBooks: https://itunes.apple.com/us/book/triumph/id1198442422?mt=11 B&N: http://www.barnesandnoble.com/w/triumph-cecilia-london/1125532709?ean=2940154239971 Kobo: https://www.kobo.com/us/en/ebook/triumph-31

Promo for Below the Line by Chelsea Camaron

Title: Below the Line: Nomad Bikers Series: Devil's Due MC #2 Author: Chelsea Camaron Genre: MC Romance (standalone within series) Release Date: January 30, 2017 The bastard boy was left alone when his mother was murdered and her killer never found. The domino effect of one person’s crime going unpunished is everlasting.  He’s no saint.
Owen ‘X’ Gallow has never known a real home. Groomed by the streets, he now has a life with the Devil’s Due MC that gives him the only comfort he has ever known. Family comes by blood and by choice. All Owen has left is his by selection. He keeps his circle close and doesn’t care to have a future.

She’s not afraid to call herself a sinner.

Hadley Combs doesn’t ask questions, and she has never had anyone to cover her back. She was born alone and will die alone, or at least, that’s how she views her life. In order to get by, she has a job to do—get them off and get herself paid, no talking necessary. The life of a hooker isn’t easy, but she gets by.