Review for Temptation in Tartan by Suz DeMello 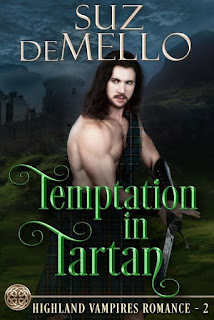 She has to marry a monster. Rumors have followed the chieftains of Clan Kilborn for centuries. Said to be descended from the Viking berserkers, they are ferocious in battle, known for tearing off the heads of their enemies and drinking their blood.

But English noblewoman Lydia Swann-Williston will marry Kieran, Laird Kilborn, to bring peace to the Kilborn lands after the horror of Culloden and the brutal pacification. A widow, she also brings needed wealth to the clan. For her part, eighteen-year-old Lydia wants children. With her husband killed at Culloden, she will make a new life in the Highlands.

The old chieftain of Clan Kilborn also died in battle, and Lydia hopes the new young laird will lack his ancestors' ferocity.

Temptation in Tartan: A Highland Vampires Romance is a paranormal romance by Suz deMello. This was a very enjoyable ready. I will say you have to love reading sex scenes to fully enjoy this book because there are quite a bit in it. But the author is great at not only writing the steamy sex scenes but the story as well, so even if you aren’t into a bunch of sex scenes in your books, like me, you can still get into the story as I did. It isn’t your normal highlander book and defiantly isn’t your normal vampire book and that is what I liked about it. I really do like how the author put those two things together; it made for an interesting read.

Best-selling, award-winning author Suz deMello, a.k.a Sue Swift, has written seventeen romance novels in several subgenres, including erotica, comedy, historical, paranormal, mystery and suspense, plus a number of short stories and non-fiction articles on writing. A freelance editor, she’s held the positions of managing editor and senior editor, working for such firms as Totally Bound and Ai Press. She also takes private clients. Her books have been favorably reviewed in Publishers Weekly, Kirkus and Booklist, won a contest or two, attained the finals of the RITA and hit several bestseller lists. A former trial attorney, her passion is world travel. She’s left the US over a dozen times, including lengthy stints working overseas. She’s now writing a vampire tale and planning her next trip.