Promo for The Homecoming by Tammy Tate 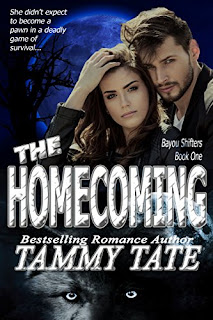 Sydney is half human, half wolf, and has fallen in love with Kyle, a full-fledged shifter who for the last six months has been appearing in her dreams.

The next full moon, Sydney makes her first shift from human to wolf. The transformation won’t be easy. Thanks to her human genes, it could leave her disfigured. Or, worse. Dead.

Edward knows he can't rush Sydney to the hospital if something goes terribly wrong, so he sends his only daughter to live with his late wife’s wolf clan deep in Louisiana’s alligator infested bayou. Despite holding Edward responsible for her sister’s death, Susan agrees to help.

Sydney learns Kyle is in Bayou Fontaine. But, for the sake of the pack, the council has already chosen Emily, as his mate. The relentless she-wolf will stop at nothing to claim what is rightfully hers and teams up with Kyle’s twin brother, Justin, who’s hell bent on revenge.

The clock is ticking... 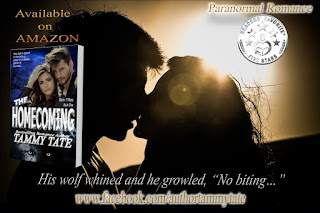 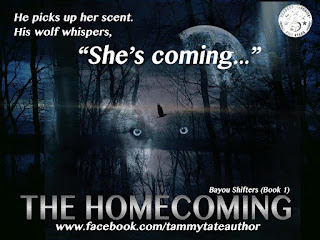 What if Lisa fell into the water? It would only be a matter of time before gators would find her. After inspecting the grass and lilies near the water’s edge and coming up empty-handed Sydney shook her head in frustration.

Her wolf said, “Instead of calling for Lisa try calling Emily.”

“Have you lost your mind?”

Her wolf dropped its head like its feelings were hurt.

Sydney frowned. “Look. I know you mean well but we have to be careful what we ask for. The evil ‘Ms. Thing’ might just show herself if I call her name.”

Her canine had a good point except for the fight part. She hoped it wouldn’t come to that.

Her wolf spoke again. “She’s out there. Don’t believe me? Call her.”

“Do you have a death wish? Because if you do I must inform you I don’t.”

“Lisa’s life may depend on us.”

“What if Emily shifts into her wolf? Should I remind you I can’t do that at will yet?”

“I could get us killed too!”

Sydney clenched her fists. “I thought you understood. I’m the boss. Obviously you didn’t get it so let me refresh your memory—”

Sydney rolled her eyes a tick to the right and whispered, “I swear if Emily doesn’t hurt you I might.”

Tammy Tate was born and raised in Hollywood, Florida but has lived most of her adult life in Texas. Her passion to write began in high school. It follows her everywhere she goes...creating a world where anything is possible. She's been married to the same wonderful man for over thirty years. Her secret to a long marriage? It's easy when you marry your best friend. In her world, Friday night is still date night.

Before she became a full-time author, she was an Executive Secretary, a Computer Consultant/Technician, and a Communications Officer (Police Dispatcher). She doesn't mind a challenge which has allowed her to race a late-model in a women's powder puff race, run barrels and poles in a play-day rodeo and drive an 18-wheeler. Somewhere in between, she and her husband raised three wonderful children. When she's not breathing life into her characters or jotting down ideas for a new book, she and her husband are exploring country roads on their Honda Gold Wing.

Since she believes reading is the next best thing to writing, she enjoys romance, fantasy, science fiction and thrillers. In December of 2013, she signed her first book contract with a traditional publisher. Her books have made Amazon's Best Seller list.

Above all, she loves to hear from you… 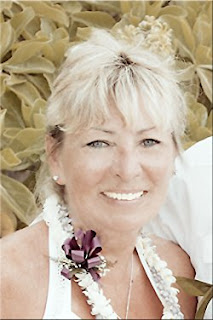