Promo for The Real News! by John Bernard Ruane 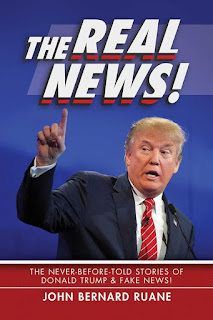 THE REAL NEWS! DELIVERS BEHIND THE SCENES STORIES ON
PRESIDENT DONALD TRUMP AND FAKE NEWS
Nonpartisan satirical book offers readers the opportunity to laugh at the political madness

NEW YORK, NY (Sept. 18, 2018) – During a seemingly never-ending news cycle with hourly reports about the combative political commentary coming out of Washington, D.C., many Americans feel overwhelmed and could really use an opportunity to laugh at this madness, so they don’t have to cry.  That is the premise author John Bernard Ruane worked under to write a new political satire, The Real News! The Never-Before-Told Stories of Donald Trump & Fake News, published by Post Hill Press.
For example, Donald Trump’s lying has been exposed by the Washington Post’s Fact-Checkers who assign him Pinocchio ratings for his fibs. Trump hates the fact-checkers and most likely has a suggestion about where they can stick their Pinocchio ratings. In The Real News! President Trump calls in a special consultant, Pinocchio, to gain advice on to avoid the negative stories from the fact-checkers. When the recommendation is to stop lying, the President responds, “Isn’t there another way?”  In another story, candidate Trump claimed he could shoot somebody on Fifth Avenue and not lose any voters. Well, The Real News! has that story exclusively, including who the President shoots and the reaction of his voters. And, there is a story about a group of Democratic Congressional leaders who discover President Trump’s greatest weakness, and then use it to gain his support on gun-control legislation.
“Americans who follow the news could really use a good laugh right now,” said John Bernard Ruane, a long-time journalist who trained in satirical writing at the famed Second City Theater. “As an independent voter, I offer a nonpartisan point-of-view, taking readers on an entertaining tour, using fact and fiction in a compilation of satirical stories that can hopefully provide some laughter and stress relief.”
Other highlights include the President watching and reacting to the talking-heads on the Sunday morning news shows; President Trump and Sarah Sanders response to a protest by his base supporters outside the White House fence; and Melania Trump revealing her true opinion about her husband.
The Real News! The Never-Before-Told Stories of Donald Trump & Fake News is now available for pre-order on Amazon.com.  Post Hill Press will launch the book on December 4. More information is available at www.posthillpress.com.

John Bernard Ruane is a long-time journalist, award-winning senior public relations counselor, and critically-acclaimed author of three books and four stage productions.  John started his career at the Chicago Sun-Times where he wrote sports and entertainment feature stories and covered the sports media. He has also written for the Chicago Tribune and Atlanta Journal-Constitution.
While at the Sun-Times, he trained in satirical writing at the famed Second City Theater and wrote three sketch revues and a rock-musical stage play, all performed in Chicago, each receiving great reviews.  He also wrote a short film and television pilot, both of which won the Illinois FilmCam Award.

John began his public relations career in 1990, joining Edelman Worldwide and then The Upjohn Company in 1995, before starting his own public relations firm, Ruane Communications, in 1998. His campaigns have won several industry awards from the Public Relations Society of America, CIPRA (Creativity in Public Relations), Big Apple and Golden Quill.

He wrote his first book, The Earl Campbell Story (ECW Press, 1999), an autobiography of NFL Hall of Fame legend Earl Campbell, focusing on his battle with panic disorder. In 2008, his second book, Parish the Thought, was published by Simon & Schuster and generated rave reviews from critics across the country. In 2011, he wrote The Wizards of Spin, about the celebrity news media. And this year, Post Hill Press published The Real News! The Never-Before-Told Stories of Donald Trump & Fake News, which is now available for pre-order on Amazon.com.

On the personal side, John was a two-sport college athlete - hockey and baseball - married his high school sweetheart, Charlotte, and they have four wonderful children. He has volunteered his time to coach 52 sports teams in basketball, baseball and softball over a 17-year period from AAU and high school to beginners.