Promo for the Truth's Harem Series by Allyson Lindt 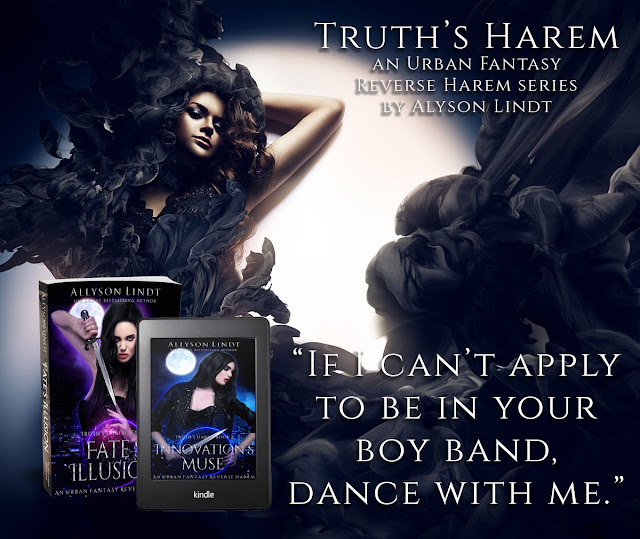 Their arrogance. Their disregard for life. Their oppressive rule.

Her father, Hades, is no exception. But since his brothers imprisoned him in a labyrinth, he and Lexi share a common goal—destroying the other gods. To free him, she must enlist the help of a loyal and gorgeous hellhound, and an obnoxious but sexy hero.

No one warned her about the trials that await. The void that threatens to consume her. The rampaging champion who can kill her with a single blow. And the ex who’s looking for vengeance of the fatal variety.

And they definitely left out the details about multiple fated loves.

Now Lexi must decide what she’s willing to surrender to defeat opponents who will sacrifice humanity before they’ll forfeit their power.

Inspiration builds empires one day and topples them the next.

The battle with the gods isn't going the way Lexi anticipated, which forces her to side with the lesser of two evils—Zeus and the asinine inventor he swears will make things right.

Icarus has no interest in helping the bratty hero who broke things that didn't belong to her, but his attraction to Lexi is impossible to ignore, and the things she can do with illusion inspire him in new and amazing ways.

Icarus is only the beginning of Lexi's problems. Cerberus is keeping secrets. Actaeon's past love is back in the most inconvenient manner imaginable. And the dead are trying to increase their numbers by calling loved ones to the other side of the veil.

To make matters worse, Lexi can hear those voices crying in pain. Suddenly working with Icarus doesn't seem like such a big deal.

Can she hang onto her sanity long enough to save the world from her father?

Lexi looked down. Holy fuck, she was about two feet above the floor. She gasped and dropped, to land hard and fall to her knees. Laughter bubbled up in her chest. “I did it.”

“It better be both of us now.” Icarus offered her a hand.

She accepted, and he pulled her to her feet, bringing her to a stop with only a few inches between them.

“What else do you think I can do?” Her question came out breathier than she intended.

“Name it. Green Lantern that shit.”

She caught her bottom lip, smirking at the comic book reference. “Giant mallets?”

“If that’s your thing.” Icarus’ hands were on her hips again, guiding her back. “I was thinking more real-world practical, like the dagger, but what the fuck? Go for broke.” His mouth hovered millimeters from hers.

The glee from what she’d accomplished mingled with the energy crackling between them. She draped her arms around his neck, desperate to close the remaining distance to his lips and terrified of doing so.

He lifted her to sit on a stool, and slid between her legs. Her body fit around his, snug and right. Instead of short-circuiting her thoughts, he set her mind on fire. So much spilled through her head at once. The past. The now. Possibilities. Ideas.

He crushed their mouths together. She moaned into him—or maybe that was Icarus, moaning. She didn’t know where he stopped and she started.

This was real and vivid, and she wanted to fall into it forever. Icarus nipped her bottom lip, then licked the sting.

“I don’t know how, but you’ve crawled into my thoughts and won’t leave. And I wouldn’t have it any other way.” His voice was a dry rasp.

She wrapped her legs around his waist, trying to feel as much of him at once as she could. “It’s a good place to be.”

Her nipples strained against her shirt, and dampness grew between her legs. There were too many clothes in the way. She wanted to explore every inch of him. Kiss along his chest. Drag her nails up his bare back. Feel the hard length that was digging into her stomach, buried inside her.