Review for Legal Briefs (Lawyers in Love #3) by N.M. Silber 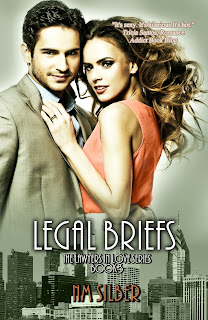 Once upon a time, childhood enemies grew up and fell in love ...
Smart and sassy lawyer, Lily Adler, has been waging an epic battle with handsome and cocky Assistant District Attorney, Adam Roth since "the glitter incident" in preschool when they were four. Their friends' marriage, a mysterious neighbor, a federal trial, and some bossy big sisters guarantee they'll be spending plenty of time together. When they try to play nicely, will they discover that their reaction to each other is even more volatile? Can they manage to date without anyone sustaining injury? Can they avoid the mobsters trying to kill them without killing each other first? Find out in Legal Briefs.

N.M. Silber's "Legal Briefs" is the third tale in the Lawyers in Love series, but you can read it as a standalone, I did. This is the first book I've ever read that was equal parts erotic, humor, and mystery! The sexy scenes are yummy and Lily and Adam's chemistry is amazing! I love their banter! It's also very funny - a few times there are things that reminded me of Tara Sivec because they made me laugh out loud. The mystery element keeps it spicy too...you never know what twists and turns the plot will take. Excellent read. I can not wait to read the companion novella, "Legally Wed." 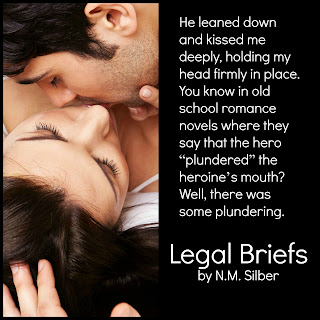 Before us was a large, opulently decorated, private room. The walls were paneled in what looked like ebony, and elaborate brass sconces held what appeared to be actual torches at first. I saw on closer examination, that they were clever electric reproductions, but they threw wavering shadows just like real flames. There were also large reproductions of famous scary paintings like Fuseli’s The Nightmare and Bouguereau’s Dante and Virgil in Hell. Cute place. Tables made of dark wood, roughly hewn, but heavily lacquered, were set up along the walls. Behind them sat chairs upholstered in rich-looking blood red velvet. The centerpiece of the room, however, was a huge golden statue of a dragon with red jeweled eyes. It sat in the middle of a stone well-like structure that was filled with something that looked like lava. Again, though, I realized it was an optical illusion. Adam and I just stood there for a second, taking it all in.

“Wow, Lilah, you’re into some funky shit,” he said finally.

“Well, this is different than the book signing I did at the Marriott,” I noted. ...

For the next hour I greeted people, smiled, and signed books. The atmosphere got much less Transylvania-like as the room filled up. Frankly, I was surprised by how many people came to my table. It still didn’t quite sink in that I had actual fans. Adam, of course, couldn’t just sit there and be quiet.

“Would you mind if I asked you a question, Ms. Alden?” one reader asked hesitantly. She and her friend looked like they were in their early twenties, and they both seemed kind of shy.

I kicked him under the table as my shy fans looked at each other and giggled hysterically, both turning a shade sort of resembling puce. That was just the beginning, though. Ten minutes later, a crowd was gathered around my table.

“Yeah, the shower scenes are really tricky. You have to make sure that you have the positioning just right, or you could be injured,” he explained to the ten women or so, who were listening raptly as I sat there, caught between being amused and pissed off. “And you know, it’s hard for her to get the details down, because obviously, you can’t have electronics in there, and the paper gets wet, you know?” I rolled my eyes.

“You’re such a bullshitter.” I laughed when there was finally a lull at what had become the most popular table in the place.

“Hey, I fully intend to help you make sure that all of the sexual details in your books are accurate. It’s the least I can do.”

“I can see how important your books are to you by how you light up when you talk about them.” His comment took me by surprise and I was even more pleased when he reached out and took my hand, gently rubbing it with his thumb.

“I love writing. It’s one of the most important things in the world to me. You were an English major in college, weren’t you?” I looked up at him through my lashes, feeling almost bashful myself for a moment, although I’m not really sure why.

“Yeah, I figured I spoke it pretty well,” he joked.

“Quote something you like for me and I’ll see if I can guess what it’s from.”

He looked up for a minute and I could see he was thinking. Then he looked back at me and stared deeply into my eyes.

“Here I am back and still smoldering with passion, like wine smoking. Not a passion any longer for flesh, but a complete hunger for you, a devouring hunger,” he said without hesitation.

“Letter from Henry Miller to Anais Nin,” I said, feeling a lump form in my throat. Even though I knew Adam was a lot deeper than he let on, it always surprised me when he let me see it. ...

All of my readers were very sweet and lovely people, who complimented me kindly, making me all warm and fuzzy. As is typical with society in general, though, there were a few odd birds in the nest.
“Hi, I’m Margie Peterman and I’m your biggest fan,” said the intense-looking young woman with a picture of me on her T-shirt. Where in the hell did she get that? Seeing me looking, she offered up the information. “I had it made from your author picture on Goodreads. Do you like it?” she asked, sounding like she would throw herself into traffic if I said ‘no.’

“I can quote every line of dialogue from every one of your books,” Margie said excitedly.
“That’s really cool,” I said with a smile. “I’m happy you liked them so much.”

“I’ve read each one of them sixty-three times.”

“I sleep with them under my pillow.”

Margie did eventually move on. Apparently, she was also a huge fan of Sebastian Romano. I wondered if she had a picture of him on her underwear. As Margie left, a small smiling man stepped up to my table.

“I am Pavel. I saw your picture on Facebook and I fell in love with you instantly.”

“I’m sorry Pavel, but she’s already spoken for,” Adam said, putting an arm around me.

“I’m very flattered Pavel,” I broke in, “but I’m afraid I’m not interested.”

“I see. Well, then, if you are in need of a top quality septic tank cleaning, I hope that you will consider giving me a call.” He handed me a card that said ‘Pavel’s Septic Services. Take the stank out of your tank.’ “Will you sign my bookmark?”

“Uh, sure.” I smiled and signed his bookmark, which happened to be for another author’s book, but oh well. Pavel left. “Do you see now why I have a pen name?” I asked Adam. I heard Pavel tell the writer at the next table the exact same thing, incidentally.

N.M. Silber is a USA Today Bestselling author and an attorney who has survived the Philadelphia criminal court system, largely by having a sarcastic sense of humor.  She has been a #1 Bestselling author in Romantic Comedy on Amazon and was voted an Amazon Reader's Choice Best New Author for 2013.  Reviewers have called her  Lawyers in Love series "fast-paced, unbelievably witty, smart and hilarious."