Review for Playing the Field by Karen Frances 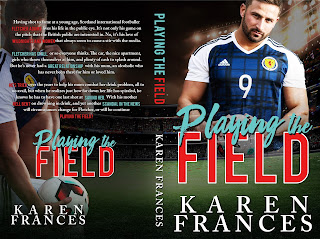 
Cover Design by Kari March Designs
Photographer Max Ellis
Playing the Field is the prequel to Playing the Game/Playing to Win and if you’ve read both books, then Fletchers story is a must read.


Having shot to fame at a young age, Scotland international footballer Fletcher Adams lives his life in the public eye. It’s not only his game on the pitch that the British public are interested in. No, it’s his love of wild nights and women that always seem to cause a stir with the media.


Fletcher has it all, or so everyone thinks. The car, the nice apartment, girls who throw themselves at him, and plenty of cash to splash around. But he’s never had a great relationship with his mum, an alcoholic who has never been there for him or loved him.


He’s tried over the years to help his mum combat her drink problem, all to no avail, but when he realises just how far down her life has spiralled, he knows he has to have one last shot at saving her. With his mother hell bent on drowning in drink, and yet another scandal in the news, will circumstances change for Fletcher, or will he continue playing the field?

Karen Frances' "Playing the Field" is the third tale in the A Beautiful Game series. This novella explains who Fletcher Adams was when he was a kid, all the way through when he went back to Scotland. This book fills in the holes in his life of what he's been through since he was a kid to make him who he is and where he's been. This book is a MUST READ!!!

Want to connect with Karen Frances join her readers group for all the latest news; 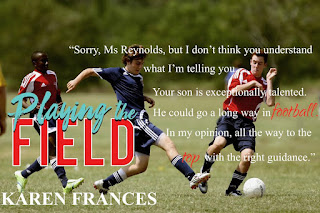 Karen Frances' "Playing the Game" is the first tale in the A Beautiful Game series. Fletcher Adams is a football star in the UK, he's been playing since he was a kid and been all over the world, including playing for the National Team. He's back in Scotland after playing in England for years and raising hell all over the press with his antics. He's back and taking care of his grandmother's estate after her death, even though his mom told him years earlier that she was dead. Jessica Taylor is a mid-twenties business owner who is pregnant by her boyfriend. One night changes everything for her and her world is not the same after. What happens to Jessica? How do she and Fletcher meet? Find out this and more in this awesome read!!!

Karen Frances' "Playing to Win" is the second tale in the A Beautiful Game series. Fletcher is playing football in another country when his coach pulls him aside after the game to tell him something. They run back to the hotel, pack and hit the airport to get home ASAP. What they find when they get back to Scotland is something else. What will they find? Who was hurt? Why? Find out this and more in this awesome read!!!