Promo for Tangled in Time by Barbara Longley 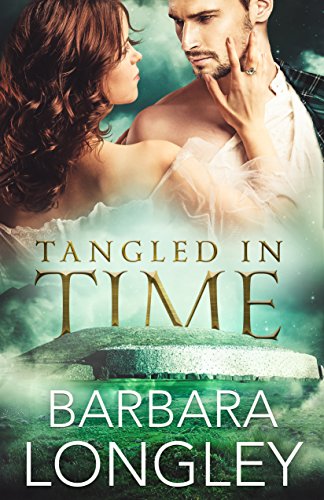 To set him free from an ancient curse, she must travel to a time of myth and legend… Regan MacCarthy’s ability to see ghosts is a gift inherited from her Irish ancestors, but it’s one she’d dearly like to give back. In an attempt to return her powers to their source, she travels to Ireland to harness the ancient magic that still permeates the mystical site of Newgrange. Instead, something far more unexpected awaits her: a strapping, gorgeous stranger who insists he’s a centuries-old Celtic warrior. Fáelán was one of Fionn MacCumhaill’s elite soldiers before being cursed by a resentful fae princess. The only way to free himself is to fall so deeply in love that he’d sacrifice his life. Not an easy matter when he’s invisible to most. Yet Regan sees him—not just the proud, handsome warrior on the surface, but the complex man beneath. Only when it’s too late does Fáelán realize that drawing this beautiful mortal into his world has endangered them both, and may destroy the happiness he’s waited an eternity to claim… Amazon Kindle About the Author: While growing up, award winning, Amazon bestselling author Barbara Longley moved frequently, learning early on how to entertain herself with stories. Adulthood didn’t tame her peripatetic ways. She has lived on an Appalachian commune, taught on an Indian reservation, and traveled the country from coast to coast. After having children of her own, she decided to try staying put, choosing Minnesota as her home. Barbara holds a master’s degree in special education and taught for many years. She enjoys exploring all things mythical, paranormal and everything newsworthy, channeling what she learns into her writing. Ms. Longley is a longstanding member of Romance Writers of America, (RWA) and Midwest Fiction writers. Author Links: Website Newsletter Goodreads Amazon Facebook Twitter Instagram