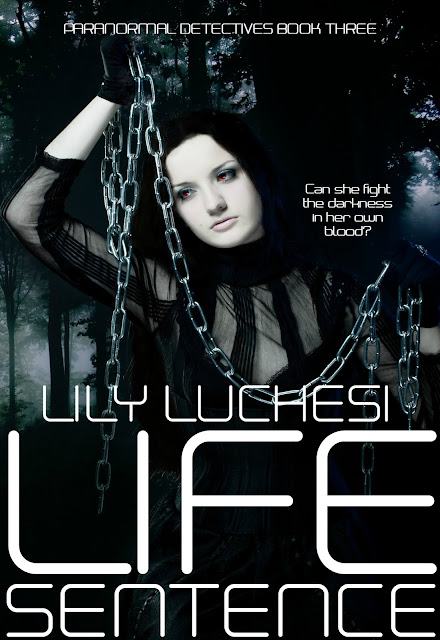 BRAND NEW RELEASE!
Title: Life Sentence (Paranormal Detectives Book Three)
Author: Lily Luchesi
Genre: Horror, paranormal, mystery
Publisher: Vamptasy Publishing
smarturl.it/LifeSentenceBk3
Blurb: She can fight evil, but can she fight the darkness in her own blood?
After the disastrous events with Miranda have subsided, Danny and Angelica have to adjust to a new kind of life at the Paranormal Investigative Division.
Fiona is still on the loose, and she has all of Hell on her side. Danny begins to enhance his psychic abilities with the help of a soul just like his. Angelica is caught between a rock and a very dark place.
Can their love survive these new trials, or will the past tear them apart?

Watch the trailer for Life Sentence, featuring the song "Together" by Matt Lande (used with permission).

“Well, well, little vamplet,” the wolf growled, “it is a true pleasure to see you in person. I see you got my note.”“Ever hear of email?” Angelica asked. Danny felt the tension in her body flowing in waves. She was just barely restraining herself from launching at the wolf, getting revenge for her fallen employee. “You of know me, eh? Well, then you know what I’m capable of.”“Oh, I do,” it growled deeply, as if pleased. “And I want to challenge you.”“Challenge me?” Angelica asked. “To what?”“A fight. Just us, to see who can win in an old-fashioned, one-on-one brawl.”“It’s been a while since I was challenged hand-to-hand. You sure you’re up for it?”Angelica’s smirk was a little alarming. Danny saw Brighton open his mouth to speak, but thought better of it at the look on her face. Angelica was about to go one-on-one with a cursed shifter. Any idiot could tell you that that was a bad idea, even for a full-blooded vampire.“Can you promise me that your male harem back there won’t get involved? Because if they do, this whole thing is off the table,” the wolf said.Angelica chuckled. “They know better than to interfere.”Brighton grabbed Danny’s sleeve. “Are you really going to let her do this?”“Do you think I can stop her? Or even help her? You know her, Brighton. She’ll incapacitate me in a second before going about the fight as if I never interrupted,” Danny said. “Stubborn as a mule.”“I can hear you,” she said as she began to remove her black gloves. Her eyes never left the wolf in front of her. “Tell me, why do this? Your orders are to kill me, not challenge me.”The wolf growled before it answered. “I heard what you did to the ones who came before me. They underestimated you. The only way for me to get a real, fair fight is to challenge you head-on. Why do you think I let that crazy witch turn me in the first place? For the power. I love a challenge. You, Angelica Cross, are a challenge.”Angelica turned around and placed her two guns on the ground, as promised. She had not brought her sword in her haste to catch the wolf. “Then let’s go--monster to monster.”The shifter scoffed. “At least I’m not still part human.”Angelica’s eyes darkened, turning blood red. Her claws started to extend, something that had never happened when she was a vamplet. Finally, Danny watched as her jaw became distended, and her fangs released. These were not the two "Dracula" fangs she had had before: these were the long needle fangs every vampire had. Each tooth became thin and sharp, while the canines on the top and bottom reaching over two inches in length.“See, that’s the thing: neither am I.” 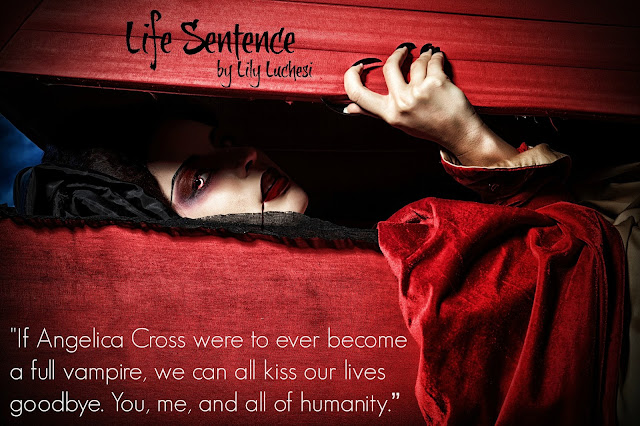 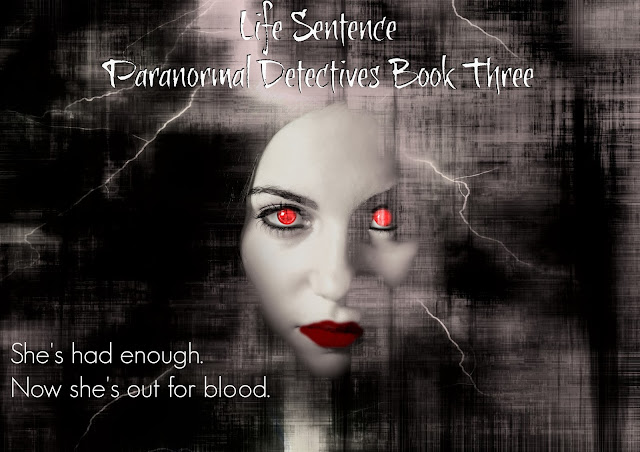 Lily Luchesi is a young author/poet born in Chicago, Illinois, now residing in Los Angeles, California. Ever since she was a toddler her mother noticed her tendency for being interested in all things "dark". At two she became infatuated with vampires and ghosts, and that infatuation turned into a lifestyle by the time she was twelve, and, as her family has always been what they now call "Gothic", she doesn't believe she shall ever change. She is also a hopeless romantic and avid music-love who will always associate vampires with love, blood, and rock and roll.
Her interest in poetry came around the same time as when she was given a book of Edgar Allan Poe's complete work. She then realized that she had been writing her own poetry since she could hold a pen, and just had not known the correct terms. She finished her first manuscript at the age of fourteen, and was first published at twenty-one.
Her debut novel, Stake-Out (Paranormal Detectives Series Book One), was published by Vamptasy Publishing on May 19th, 2015. Book two, Miranda's Rights, was released on January 8th, 2016. Book three, Life Sentence, will be released on August 2nd, 2016 by Vamptasy Publishing, and book four (title TBA) was also just accepted by the publisher and will be released in January 2017.
She has a short story, "Undead Ever After" in the CHBB Publishing anthology Love Sucks (released on June 13th, 2015). Her first erotic short story, "Have No Fears", was published in the Hot Ink Press anthology Naughty Bedtime Stories: In Three Words on October 10th, 2015. She will also have a short erotic horror story, "The Devil's Dozen", in the upcoming Hot Ink Press anthology Death, Love, Lust, which was released on February 4th, 2016. Her horror short "Too Young To Kill" was released in the CHBB Publishing anthology Lurking In The Shadows on June 28th, 2016.