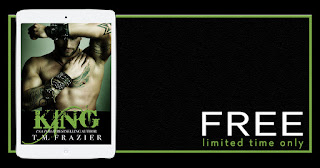 KING by T.M. Frazier is FREE for a limited time only!
Grab this dark and dangerous bad boy today!
AMAZON US: https://goo.gl/5ngb4G
AMAZON UK: https://goo.gl/DjHjV0
AMAZON AU: https://goo.gl/Zb7s5N
AMAZON CA: https://goo.gl/BC9rkO
Homeless. Hungry. Desperate.
Doe has no memories of who she is or where she comes from.
A notorious career criminal just released from prison, King is someone you don’t want to cross unless you’re prepared to pay him back in blood, sweat, sex or a combination of all three.
King’s future hangs in the balance. Doe’s is written in her past. When they come crashing together, they will have to learn that sometimes in order to hold on, you have to first let go

T.M. Frazier's "King" is the first book in the King series. Brantley King is finally home after a few years in jail. At his welcomes home party he meets Doe, a woman who's just looking for somewhere to crash for the night. Her friend steals money from King and runs, so King and Preppy cuff her to the bed. Little do they know her friend isn't coming back. Who is Doe? Where did she come from? Why doesn't she remember who she is?  What happens when King finds out who she really is? Will he tell her? Who is she? Why was no one looking for her? This book has so many twists and turns you never know which way is up. Preppy gives a ton of comic relief, and Bear and his MC give it color with their words and tatts. This is a MUST READ BOOK!!!!

T.M. Frazier's "Tyrant" is the second book in the King series. So Doe goes home to her family, but is that where she belongs? Is she wanted there?  Who really loves her? Is she safe? Are the people in her life who they say they are to her? Who hurt her? There's so many questions Doe doesn't know which way is up. Will she remember everything? Will King ever come back for her? Can King save her from the tyrant? Who is the tyrant? Find out this and more in this awesome read!!!

T.M. Frazier's "Lawless" is the third book in the King series. Thia takes a load of oranges to the local Stop N Shop from her families farm where the owner asks her to watch the shop while she goes next door the the beauty salon for a while, even though she's only 10. She's watching the store when someone comes in and tries to rob it. Bear walks in and knocks some sense into his brother and leaves Thia with a ring and a promise that he'll be there when she needs him and leaves with his brothers. 7 years later she needs him and goes to find him to help her when the club lets her in and all hell breaks loose. Bear comes back when King calls to help out with a girl who is dropped off mysteriously. This story has to many twists and turns you don't always know which way is up, but it's so worth the read!!! This is a MUST READ!!!!


T.M. Frazier's "Soulless" is the fourth book in the King series. This book will leave you going, what in the hell just happened?!?!?!?!?! I'm so not kidding!!!! This book has so many twists and turns that you sometimes don't know which way is up. Bear is in jail for the murder of Thia's parents. King and Rae get Bear's friend Rage to watch This back at her parents house to keep her safe. Rage is awesome, and an assassin. She likes to blow stuff up and doesn't sleep. Bear won't let her come see him in jail, anyone really and gets a surprise while behind bars. Will Bear get out of jail? What happened to his mother? Where does Chop fit in? Can Thia and Bear be together? How is Grace? Who else can hear Preppy? Find out this and more in this heart stopping book!!!!!!!