Review for Roman by Sawyer Bennett 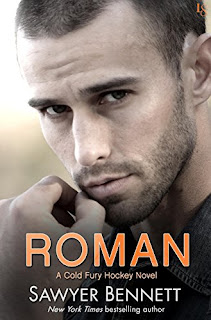 New York Times bestselling author Sawyer Bennett steams up the ice all over again as the Carolina Cold Fury hockey team’s hottest bad boy gets his first taste of something good.

In a league full of troublemakers, Cold Fury defenseman Roman Sýkora stands out—at least when it comes to negative publicity. When he’s not chilling in the penalty box, the sizzling Czech skate demon is racking up tabloid headlines for his scandalous behavior with the ladies. But now Roman’s feeling the burn from management to clean up his act, or else. Luckily he’s got an enticing distraction: a fun-loving barista who plays the ukulele and brings out a side of Roman he didn’t know he had.

Lexi Robertson came to Raleigh, North Carolina, to finally meet her father, Brian Brannon, and her half sister, Gray, both of whom work in the Cold Fury’s front office. That’s where she first meets sexy, intimidating Roman—who’s really a big softie at heart. As one relationship takes off, another begins: Brian seems to be clicking with Lexi’s boss at the coffee shop. But when the friction between Roman and her new family heats up, Lexi wonders whether she’s a pawn in their game. Feeling hurt and foolish, Lexi’s ready to quit while she’s ahead. Trouble is, Roman’s not ready to quit on her.

“If you enjoy stories about a free-spirited woman accepting a bad boy just the way he is, or books about discovering an unknown family and the struggles to discover her place within that family, you might want to give this a try.”—Harlequin Junkie

“I love the story line which kept me going the whole time. Overall, a fantastic read.”—AC Book Blog

“I read this book in one sitting and even now, a week later, these characters are still on my mind.”—FMR Book Grind

“Roman was exactly what I hoped for. Bravo, Sawyer Bennett!”—Happily Ever After Book Reviews

Sawyer Bennett's "Roman" is the seventh tale in the Cold Fury series. Roman Sykora is the bad boy of hockey for the Carolina Fury. He gets into trouble on and off the ice. He gets called into the main office where he sees a woman in the waiting room that captures his attention. Lexi is at the Carolina Fury office to being some shocking news to the owner. What does Lexi have to tell him? What will Gray have to say about it? Where does Roman fit into everything? Find out this and more in this awesome read!!!

Sawyer Bennett's "Alex" is the first tale in the Cold Fury series. What happens when the hot shit, I don't give a fuck about my fans hockey player, Alexander Crossman, gets told that he needs to overhaul his image and help develop a program for teens about drug and alcohol abuse with a woman from a non-profit group? Sutton is a young, ambitious abuse counselor who is given this huge project to develop with the bad boy of hockey, Alexander Crossman of the Carolina Cold Fury. What happens when their worlds collide? Will they get this program done and running, or will they explode in a blaze of glory? There are a lot of awesome characters who join them on their journey. I can't wait to read the rest of the series!

Sawyer Bennett's "Garrett" is the second tale in the Cold Fury series. Garrett Samuelson is a pro hockey player for the Cold Fury. He's had the summer off and has filled it with fun, mostly hanging out with his teammate Alex playing golf and working out. Olivia Case is Sutton's cousin and has been invited to go to the coaches house for a end of the summer party by Sutton and Alex. Garrett arrives and see this beautiful woman in the backyard and doesn't know who she is. He walks over to see just who this beauty is. Once introduced, she knows exactly who he is, a manwhore. She's heard stories about him and his reputation and doesn't want anything to do with it. She had been told bad news a few days before and doesn't do one night stands. Can Garrett change her mind? Is he more than a one night stand? What happens when he finds out what Olivia is going through? Can they make it? Find out this and more in this awesome read!!!

Sawyer Bennett's "Zack" is the third tale in the Cold Fury series. Zack Grantham has had a shitty couple of months. He lost his girlfriend and mother of his son in a auto accident and broke his wrist and had to have surgery on it, taking him away from hockey for a few months. Roberta Francis has just graduated with her BA from the local university and needs a job to save money to go back for her masters. She's hired to be a nanny for Ben, Zack's son. Roberta hates her first name and asks to be called Kate, after her middle name. Kate hides behind her baggy clothes and glasses away from the world after being assaulted in middle school. She doesn't show the outside world who she is or what she really looks like. Kate and Ben get along like a house on fire and Zack sees that his son is happy, even though he just list his mom. What happens when Zack sees her without her "armor" on? How will he see her when he sees her for the first time as herself? Will their "friends with benefits, no strings attached" relationship work? Can they have a no strings thing and still make it out the other side unscathed? find out this and more in this awesome read!!!

Sawyer Bennett's "Ryker" is the fourth tale in the Cold Fury series. Ryker Evans is the new back-up goalie for the Cold Fury hockey team. Gray Brannon is the new GM for the Cold Fury. Her dad has stepped down and appointed her to the position from her scouting position. She has recruited her fair share of the team. Ryker has gotten his 2 girls from their mom and has taken to being a full time dad. With the help of Zack's girlfriend and nanny, Kate, he's learned how to be a good dad and take care of his 2 girls. Gray has felt a pull to Ryker since they first met and she's fought it because she's his boss now. Can their pull make them lose control and do something they shouldn't? Will Ryker fight it too? What happens when Ryker's past comes back to haunt him? Can love conquer all? Will the Cold Fury win the cup? Find out this and more in this awesome read!!!!

Sawyer Bennett's "Hawke" is the fifth tale in the Cold Fury series. Hawke Thierren and Vale Campbell have been together for 4 years, ever since they were 16 years old. Hawke is leaving the next day at the age of 20. They are partying with their friends when Vale asks to leave because she's not feeling well. Hawke stays and wakes up the next day to her breaking up with him. He leaves and doesn't look back. Seven years later Hawke has been traded to the Cold Fury and get the shock of his life when Vale is introduced as the new assistant trainer for the team. What happens when they see each other again? Can they be civil to each other? Friends? What secret is Vale still keeping from Hawke? Find out this and more in this awesome read!!!!

Sawyer Bennett's "Max" is the sixth tale in the Cold Fury series. Max Fournier is back to working hard to get his starting goalie position back. H'es been training hard with Vale to do it. Max goes to a convenience store one night to get snacks when a few customers harass the employee. She then helps Max when the back door opens and two little people fly out with a third one screaming for help. That one night changes everything. Can one hockey player befriend a regular woman with three kids? Find out in this awesome read!!!

Since the release of her debut contemporary romance novel, Off Sides, in January 2013, Sawyer Bennett has released more than 30 books and has been featured on both the USA Today and New York Times bestseller lists on multiple occasions. A reformed trial lawyer from North Carolina, Sawyer uses real life experience to create relatable, sexy stories that appeal to a wide array of readers. From new adult to erotic contemporary romance, Sawyer writes something for just about everyone. Sawyer likes her Bloody Marys strong, her martinis dirty, and her heroes a combination of the two. When not bringing fictional romance to life, Sawyer is a chauffeur, stylist, chef, maid, and personal assistant to a very active toddler, as well as full-time servant to two adorably naughty dogs. She believes in the good of others, and that a bad day can be cured with a great work-out, cake, or a combination of the two. 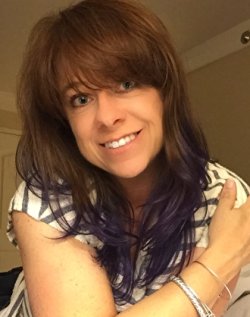