Freebie! Off Sides by Sawyer Bennett 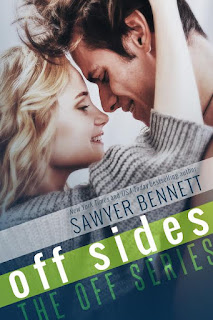 Ryan Burnham is the privileged son of a U.S. Congressman and captain of his university’s hockey team. While he is on the verge of fulfilling his dreams to play in the NHL, his parents want him on a different course. One he is expected to accept for the sake of his family’s public image.Forced her to abandon her music career after the heart breaking death of her parents, Danny Cross exists on the opposite side of the tracks from Ryan. She is struggling to make her own way, working two jobs, attending college part time and volunteering in a homeless shelter. She is on a mission to build her own success.With a chance meeting, their vastly different worlds collide, causing each to evaluate whether they are truly on the correct path to self-fulfillment and happiness. Can their relationship survive? Particularly when others are against them every step of the way. A lot can happen in just ten short days...