Promo for Dust on the Bottle by Lori King 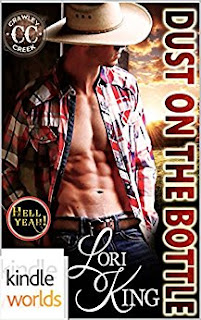 In a small town in North Dakota there resides a family of misfits on the Crawley Creek Ranch. Brought together by hardship, and heartache they’ve bonded without blood ties, and seek to help others. Four friends who call each other brother, will be tested when their community is threatened. Will true love distract them from the dangers they face, or will each man be strengthened by his lady love?

Sister Story: Dust on the Bottle

Dust on the Bottle

Freelance Photographer Monica McCray has one goal, never pass up an adventure. Coming to Crawley Creek Ranch, she finds one.
Kyler DeWitt’s inner demons are close to killing him. Booze and self-pity leave him a ticking time-bomb.
When these two forces collide, a passion like no other ignites. Now Monica realizes the adventure she wants includes North Dakota roots, but will she be enough to keep Kyler grounded or will she be just like the dust on one of his bottles?

This story is part of the Hell Yeah! Kindle World, which means it’ sonly available in ebook, and only via the US Amazon site.

Dust on the Bottle Excerpt:

“So what have you been up to since I saw you last? Besides cattle drives in North Dakota.”
Kyler didn’t respond for a moment, then he seemed to decide to let her avoidance slide for now. “Well, let’s see… I got fired from my job a few weeks after you left because I stopped showing up, and when I did show, I smelled like weed.”
Monica’s mind raced. She knew he enjoyed a hit or two occasionally when they were socializing, but the idea of him doing more than that was a shock.
“Without a job, I didn’t have the money to buy the weed I wanted, so I took up my buddy’s offer to sell it here and there. Next thing you know, I’m hooked on several other drugs and in jail for theft.” He turned away from her, and moved to lean his back against the house so he could stare out to the empty pasture. “I overdosed, and thanks to my mom’s intervention, I wound up here after a couple of stints of rehab. This is where I grew up.”
“I don’t know what to say.”
He shrugged and stayed silent.
“Are you…okay now?”
His laughter was empty, as he crossed his arms over his muscular chest, exposing the veiny forearms with their crisp blond hair that turned her on so much. “Okay? Do you mean am I still an addict? Yes, and that will never go away, but I’m fighting every day to stay sober. I’m lucky to be alive, and Drannon offered me a place to live and work, so I’d say, yes, I’m okay.”
“Good, you deserve a solid place to plant roots. I’m sorry you had to go through all of that to find it.” She moved to take a seat at the picnic table a few feet away.
“And you? What have you been doing since Seattle?”
“Working. I’m still freelancing mostly, but I took a job for a sports magazine that gives me steady work and connections that have really paid off for me. I basically live out of my backpack and camera bag.”
“No more nature photography, huh?” he asked, reminding her that she’d shared her secret dream of working for National Geographic with him.
With a shrug, she shook her head. “Gotta go where the wind takes me. The money is in photographing sports heroes, not gophers.”
When their combined laughter died off, they faced each other in an awkward silence.
“Look, Kyler, I’m sorry if I left things unresolved, but I’m not good at goodbyes.” Her stomach twisted in knots at the same time as her body ached to be back in his arms. It was an unsettling feeling. “I wanted to tell you I was leaving, but I honestly just didn’t know how.”
“And it seemed like a better idea to just leave me hanging?” His earlier ardor had been replaced with anger, and while others might have cringed at the flash of fury in his green eyes, Monica knew she had nothing to worry about. Kyler was hard as nails with everyone but her. It was a juxtaposition in his character that had always piqued her curiosity.
“No, it was just how it happened. I had to catch a flight that morning, and I tried to find a moment to tell you the night before, but you came home with rigatoni and wine, and we had sex, and…”
“And? You didn’t think to say, ‘Hey Ky, before we get to the multiple orgasm portion of the evening, I’ll be gone when you wake up in the morning.’ Really, Mon?”

Best-selling author, Lori King, is also a full-time wife and mother of three boys. Although she rarely has time to just enjoy feminine pursuits; at heart she is a hopeless romantic. She spends her days dreaming up Alpha men, and her nights telling their stories. An admitted TV and book junkie, she can be found relaxing with a steamy story, or binging in an entire season of some show online. She gives her parents all the credit for her unique sense of humor and acceptance of all forms of love. There are no two loves alike, but you can love more than one with your whole heart.

With the motto: Live, Laugh, and Love like today is your only chance, she will continue to write as long as you continue to read. Thank you for taking the time to indulge in a good Happily Ever After with her. Find out more about her current projects at http://lorikingbooks.com, or look her up on Facebook: http://www.facebook.com/LoriKingBooks or Twitter: https://twitter.com/LoriKingBooks.