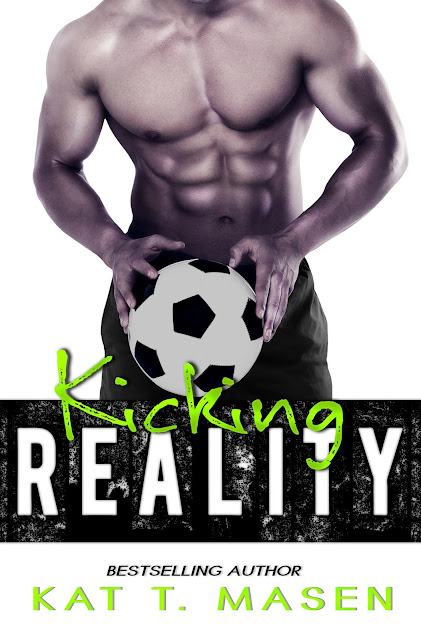 Everyone thinks they know who I am. I’m that reality TV star that fell in love with co-star Wesley Rich. But reality wasn’t my life. It was the life I lived in front of the cameras.
A life designed to entertain millions of watchers each Monday night.

It only took one night to relive my past, and one night to forget my future. With someone who had been there all along.

Soccer is my life—it’s in my blood.
I train hard, I play hard, and I win.  Nothing will break my focus.

I should have been able to avoid it, resist the temptation. But it’s there, playing every Monday night, an obsession I can’t seem to shake.

And I don’t know what was harder: hiding it from my best friend, or watching the woman I want live a life with someone else. 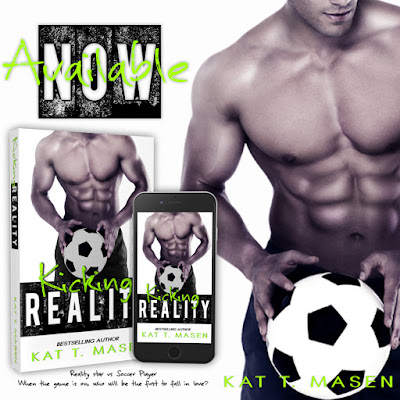 Kat T. Masen's "Kicking Reality" is a great read. Emerson is on a reality show with her boyfriend of a few years, they met and fell in love with each other on the show. What she doesn't see coming is for a pap to catch him doing something that he shouldn't. That one thing changes everything. She is home on the east coast visiting her family when she gets the call. Her brother and his best friend Logan came home from the UK for 2 days to tell them something. They never saw what he has to say coming. It makes Emerson sad that she was left out and with her fiance screwing up it makes her take a good, hard look at her life. Will she figure out what she wants and needs? Find out in this awesome read!!! 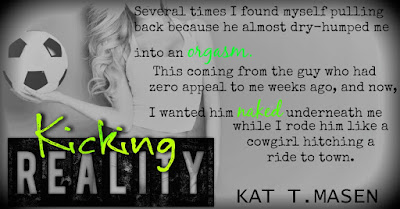 
“You honestly believe all that rubbish? Falling in love? They knew from the start? C’mon. It’s impossible,” I ramble to myself as Logan quietly stands at the edge. “You can spend a whole lifetime knowing someone and still feel unsure if the love is there. Two minutes in a bar and that person is your soulmate? Ludicrous.”

Logan turns his neck, body following until we’re facing each other. His presence radiates with superiority, just like when we were kids. I wasn’t afraid back then and I am not afraid now. His tough-guy persona doesn’t frighten me one bit.

“Hypocritical coming from someone engaged to a man that swore he fell in love with you the moment he saw you?” he questions, sarcasm lacing every word that left his mouth.

The shock of his words cripples my ability to respond with a witty comeback. We weren’t having a good ol’ laugh throwing worms in the bottom of Ash’s school bag anymore. And my initial reaction to his cruel words does nothing to calm the sea of emotions ravaging inside me. Logan Carrington was one of them. They all came from the same seed. The seed of men that felt entitled. Screw women, move on, fuck feelings and repeat. 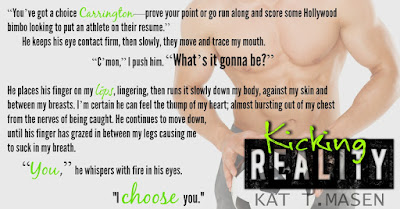 Born and bred in Sydney, Australia, Kat T. Masen is a mother to four crazy boys and wife to one sane husband. Growing up in a generation where social media and fancy gadgets didn’t exist, she enjoyed reading from an early age and found herself immersed in these stories. After meeting friends on Twitter who loved to read as much as she did, her passion to write began and the friendships continued on despite the distance.

“I’m known to be crazy and humorous. Show me the most random picture of a dog in a wig and I’ll be laughing for days.”