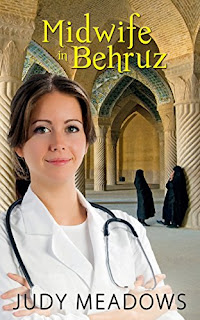 Lay​la's trip to Behruz, her father's country and home of her early years, is meant to be one last adventure before she joins her dreamboat fiancé in Texas. But Behruz casts a spell on her. Her knowledge as a midwife is needed there. Serving women's health in a country where no one talks about "such things" presents interesting challenges.


Majid, an American-trained doctor, is back home in Behruz serving his people.​ He's ready to settle down, but because of an old family ​bias, American women are forbidden to him. That's no problem until Layla walks into his clinic with a sassy smile, a jar of semen, and her T-shirt proclaiming "Midwife at Your Cervix."

ESCAPE FROM BEHRUZ
by Judy Meadows 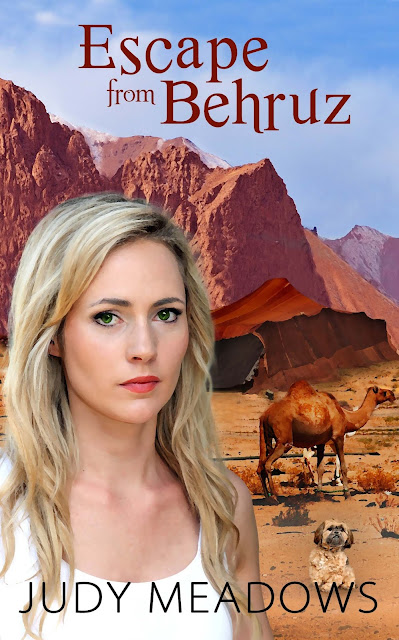 Two years ago, abandoned, despondent, and pregnant, Olivia was pressured into letting her sister and her sister’s husband, the sultan of Behruz, adopt her baby and pretend he’s their natural child. Her sister died soon after the baby was born, so Olivia has been able to raise her son after all. The sultan lets her stay in the palace, but if she ever reveals the baby’s true parentage, he’ll make sure she never sees the child again.

Now rebellion threatens the country. And the baby’s real father, Rashid, has returned. He arranges for Olivia and the baby he doesn’t know is his to escape with him to Iran, traveling under cover of the nomad migration.

Can Olivia spend nights in a tent with Rashid without succumbing to the attraction that has always drawn her to him? Can she survive the trip without revealing her secret and without losing her heart to him once again?

Judy Meadows' "Escape from Behruz" is a standalone read. It's sweet, but with nice sexy bits. Kind of a Middle Eastern twist on some old classics! Good writing with lots of detail. Love the bit with the puppy. I will definitely check this author out again!

I grew up in Minnesota but now live in a small town in Oregon with my husband Jim. I’m a mom, grandma, wife, gardener, cat-lover, nerd, and traveler.

I’ve had a few different careers, starting with work as a systems engineer for IBM after college. Then there was my “earth-mother” stage. Jim and I had a farm in northern California where we raised kids (one of our own and several foster kids), apples, Asian pears, and raspberries. When we retired from farming and moved to Oregon (when we should have been done with the parenting thing), we added one more child, a 10-year-old girl adopted from a Russian orphanage.

Next, when our new daughter was settled into the family, I became a doula and childbirth educator. (See www.doulajudy.com and www.mexicanmidwives.com) During 20 years of working as a doula, I helped 460 women in labor.

During a sabbatical from career number one (computers), I spent a year in the Middle East, traveling and camping in a Landrover. Later, Jim and I spent a year and a half in Iran working as computer engineers on a project that was meant to modernize the Iranian phone system (but was interrupted by the revolution). I based the fictional country of Behruz on Iran and Afghanistan as I knew them back then, before war and political turmoil altered both countries.

Now, at last, I’m fulfilling a lifetime dream by writing. My second romance novel, Midwife in Behruz, which will come out at the end of 2017, draws on my experience with childbirth. I’ve just started plotting the final book in what will be a trilogy of stories set in Behruz.