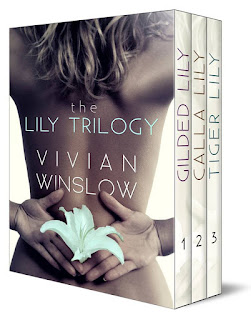 Vivian Winslow’s “Gilded Lily” is an attention-grabbing first tale in her Gilded Flower Series. It’s very much a cross between “Sex and the City” and “Under the Tuscan Sun.” There are several different sexy males in this one. Each sex sesh is a little steamier than the last. It’s a quick read, so be ready to read the next installment.

Vivian Winslow’s “Calla Lily” is the second short story in the Gilded Flower Series. There’s still quite the “Sex and the City” vibe, although Lily, the leading lady, is also dealing with a family medical issue as well. There are a few hot nookie scenes and the Gustavo character is one of those sexy leading men you love to hate. It’s really short and ends very abruptly. I’m rooting for Ben to win out in the next episode!

Vivian Winslow’s “Tiger Lily” is the third short story in the Gilded Flower Series. As always, there’s a “Sex and the City” vibe with an abundance of racy sex. Lily is a lucky girl, if you know what I mean! We finally get to know Lily’s happily ever after and who she ends up with. I’m not giving it away, but I will say that Ben didn’t win in this round, but there’s still time for him to find love in the future stories in this series.