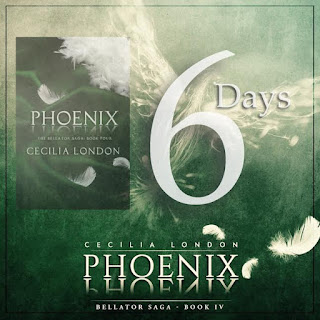 Ripped away from each other by circumstances beyond their control. Reunited in a place they never expected. Separated but never quite apart.

Her confidence shattered, Caroline finally starts to deal with what happened at The Fed. Jack is determined to convince her that she’s more than she thinks she is. That she wasn’t destroyed by her experiences. That their relationship is worth the fight. But will he give up before it’s too late?

Phoenix is the fourth installment in The Bellator Saga. It should be read after the first three novels in the series.

In case you missed it, here are my reviews of #1 - #3:
Cecilia London's "Dissident" is the first tale in the Bellator Saga. It's an interesting premise. Something has gone wrong and states are seceding from union and government leaders are enemies of the state somehow. This storyline is being slowly revealed in an intertwining way with the backstory of the leading lady, Caroline. Half political thriller and half romance. The intimate scenes usually just include the foreplay elements and hint at what happens - more of a "closed door" approach - some of the foreplay, however, is described in full yummy detail!
4 out of 5 stars


Cecilia London's "Conscience" is the second tale in the Bellator Saga. When I reviewed #1, I wrote that the intimate scenes had a "closed door" approach, but not so with #2! There are lots of sexy, fully detailed nookie scenes. Mmmmm... I really like the way the story is told as a mashup of past and present. And the sexy Jack flashbacks are the best! I can't wait to see what's next in #3 ("Sojourn") coming next year!


Cecilia London's "Sojourn" is the third tale in the Bellator Saga. Just in case you haven't read the series, something has gone wrong and states are seceding from union and government leaders are enemies of the state somehow. This storyline is being slowly revealed in an intertwining way with the backstory of the leading lady, Caroline. You definitely need to read #1 and #2 before you read #3. It's hard to say more without spoilers. Overall, just a really good #3...probably the best #3 I've read in a while. It's gritty and amazing.

Cecilia London is the pen name of a native Illinoisan currently living in San Antonio, Texas. She's filled several roles over the course of her adult life - licensed attorney, wrangler of small children, and obsessed baseball fan, among others. An extroverted introvert with a serious social media addiction, she is the author of The Bellator Saga, an epic, genre-crossing romance series. You can catch all of her quirky updates on Facebook, Twitter, and Instagram, or at her website.