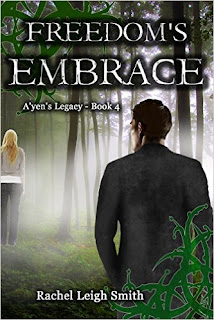 If Taran loses his girl--and his second chance at love--he'll never find his way to freedom.

A'yen's Reign: Year Two
Taran has served Nicco, prince of Marcase, for twenty-three years. While on a fact-finding mission to Corsica--a planet annexed by the empire thirteen years ago--Taran and Nicco are kidnapped by the Freedom Alliance and taken deep into the Corsican hardwood forests.

Da'Renna, sister to King A'yen's linked bodyguard, has loved Taran since the moment he saw her. Leaving him behind wasn't easy, but her brother needed her more. Hearing about Taran's kidnapping makes her wonder if she made the right choice.

With the help of a friend from Corsica, Da'Renna and her brother sneak in to find Taran. When mercenaries take her hostage, Taran must make the choice he dreads most: his master, or his soul-mate.

Freedom isn't supposed to be this hard.

Note: This novel stands alone and is a great entry point into the A'yen's Legacy futuristic romance series

Rachel Leigh Smith's "Freedom's Embrace" is the fourth tale in the A'yen's Legacy series, but you could read it as a standalone. As always, there is a full ensemble cast and amazing storytelling. The way they connect through their minds when far apart is heart wrenching! Once again, the author isn't afraid to mix in M/M relationships and I think that's so brave. The intimate scenes are glorious and powerful. I can't wait to read #5, "Hidden in Ashes."

Just in case you missed them, here're my reviews of the first three books in the series:

Rachel Leigh Smith’s "My Name Is A'yen" and “The King’s Mistress” are the first and second books in her A’yen’s Legacy series. It’s an interesting science fiction romance series. Sort of “Stargate” meets “In Distress” by Caethes Faron (which is a M/M read that’s very well done). The series is daring – I like that she took the chance to have the leading man have a history with another man. The main characters, Fae and A’yen are both complex and multifaceted. Definitely a series for smart readers to really dig into. #2 is definitely not a standalone book, you need to read #1 first in order to understand the intricate details of this mythology and to get to know the full ensemble of characters. My only small issue is that I wish we had gotten more detailed descriptions of the intimate scenes – seems like we get the start of the scene or a recap of what happened, but never a nice, full-on sexy scene.

Rachel Leigh Smith's "To Save a Life" is the third book in her A'yen's Legacy series. It’s an interesting science fiction romance series. Sort of “Stargate” meets “In Distress” by Caethes Faron (which is a M/M read that’s very well done). This time we get to have a more in depth look at Ro. Ro has been marked as a sex slave and he can get into minds. Once again, all of the characters are amazingly deep and the story line has lots of complex twists and turns. Many of the intimate scenes are done with a more closed door approach, describing the beginning of the act or using only vague terms. Some readers prefer that, but I like a little more naughty stuff! There will be a #4 and I can't wait to read it.