Review for Haunting by Stephanie Summers 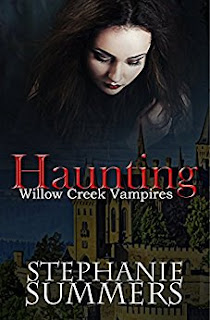 A pairing neither wanted. A love worth dying for.

Sabine Crowley is adjusting well to her new life at Willow Creek Manor with Remy by her side. That is, until she finds out some devastating news from Bastian. Has Remy been lying all along about his feelings for her? Was she a fool to believe he could really love her?

Remy is accused of trying to leave Sabine and his responsibilities to Bastian behind. He’s locked up and drained of his lifeblood with no memory of the past few weeks. Alone and unable to escape, he desperately tries to remember what he’s done to land himself here.

In a house full of vampires, not being paired puts Sabine into quite the predicament. Luckily for her, she’s managed to befriend some powerful allies who are more than willing to help her out in any way they can. It’s up to Sabine to figure out the truth about Remy and how the secret of Willow Creek can help or hinder her quest to be free.

Haunting is the second book in the ongoing paranormal romance between Sabine and Remy. If you like sexy vampires, strong-willed heroines, and lovers who would do anything to keep the other safe, then you’ll love the second installment of The Willow Creek Vampires Series by Stephanie Summers.

Pick up Haunting and continue the journey with Remy and Sabine today!

Stephanie Summers' "Haunting" is the second tale in the Willow Creek Vampires series. I loved this #2 - such a maturing of the series. Some very sexy times! Remy & Sabine are an amazing couple. I loved the "ghostly aspects" of this part. Lots of neat twists and turns. An extra dash of witchy goodness too. I already bought #3 and I can't wait to see what happens! 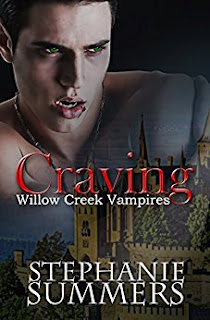 An aspiring artist unwilling to accept her destiny. A cocky vampire tasked with making sure she does. A fate neither saw coming.

Sabine is an aspiring artist with big dreams for her life. When she finds out she’s the latest offering in a two-hundred-year-old pact between the small town of Willow Creek and the vampire lord watching over it, she’s determined to get as far away from the town and the vampire she’s been paired with by any means necessary.

Remy understands Sabine’s desire to run, as Willow Creek is the last place on earth he wants to be. Unfortunately, his maker has commanded him to make sure she stays put and safe, so that’s what he’s going to do. When an opportunity to get even with a former foe coincides with Sabine’s escape attempt, Remy decides to let her run… temporarily. Once the two come together, an undeniable spark ignites between them, but will they look past their contempt for one another and give in to their temptations or are they destined to hate each other forever?

Craving is the first book in a paranormal romance series. If you like sexy vampires, strong-willed heroines, and lots of steamy tension, then you’ll love the first installment of The Willow Creek Vampires Series by Stephanie Summers.

Stephanie Summers’s “Willow Creek: Craving” is the beginning of a great new series. It has elements of Shirley Jackson’s “The Lottery” and Suzanne Collins’s “Hunger Games” mixed into a spicy paranormal romance. I love the dream sex – very Lynsay Sands. The characters and the story are very well-developed. I can’t wait to read more about Willow Creek which is apparently some sort of vortex for beasties (like Buffy the Vampire Slayer’s Sunnydale). Basically, this is a very skillful blending of the best plot elements from your favorite storylines into a unique new series.

Stephanie Summers has written several books including The Willow Creek Vampires Series, The Bludworth Chronicles, and The Take Me Duet, with several more books in the works. She's a wife, and a mom to two kids, two dogs, and two cats. When she isn't busy running Casa De Summers, you can usually find her in her pajamas working on her next book. 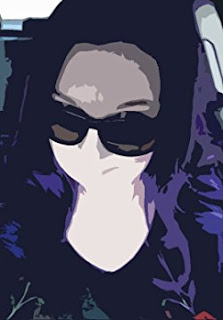