Review for Retaliate by M.N. Forgy 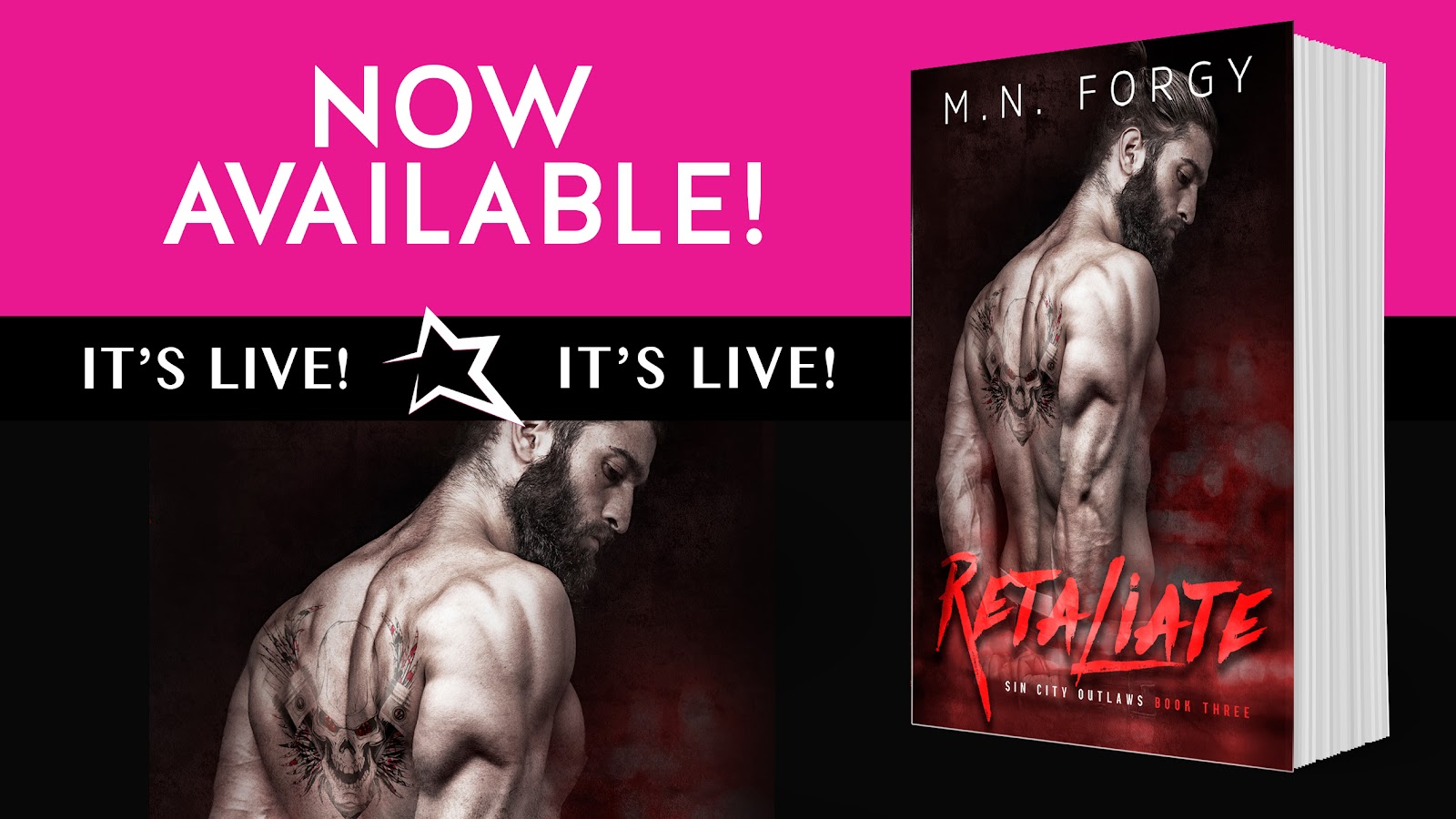 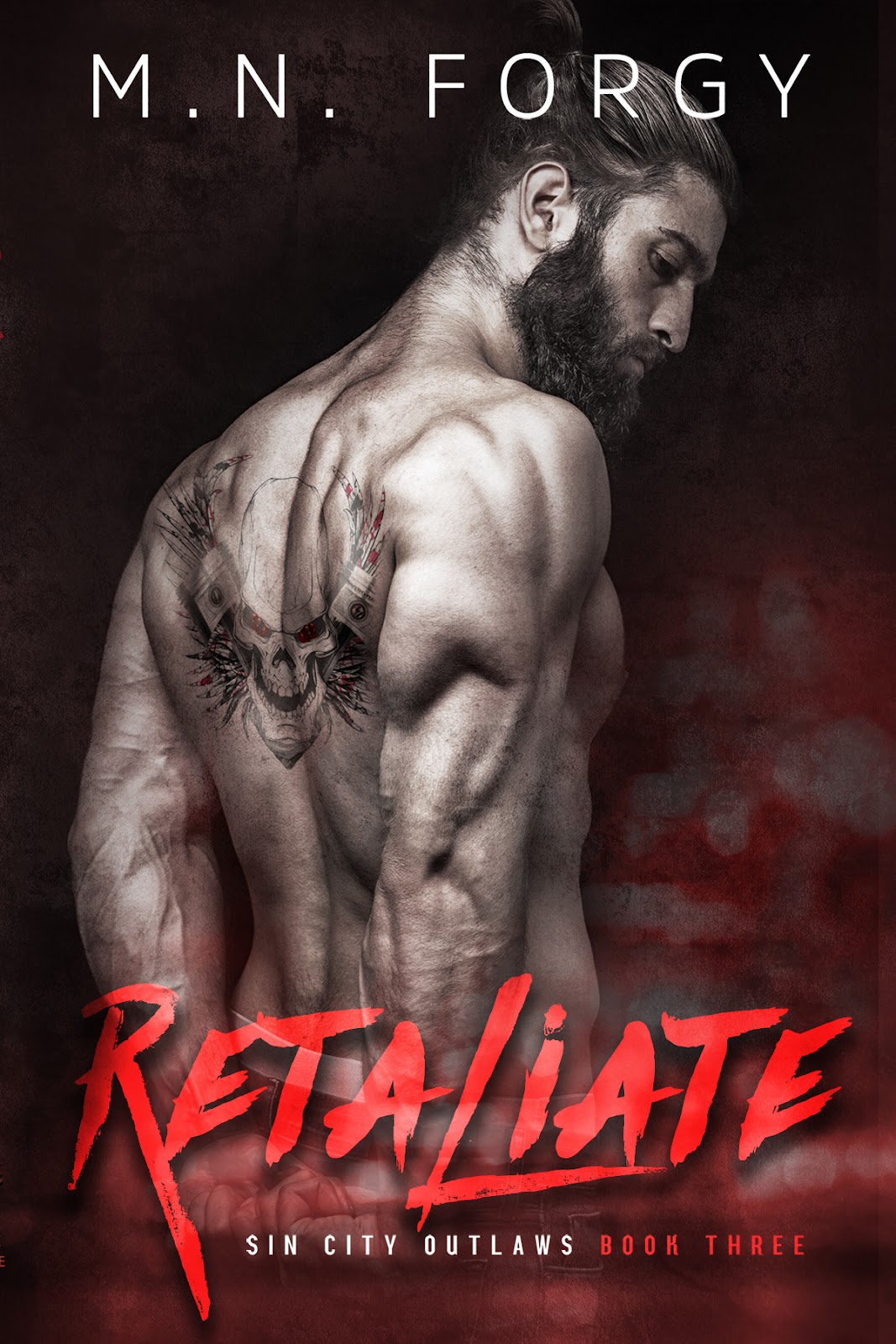 Blurb
Being the Vice President of the Sin City Outlaws Motorcycle Club comes with its perks.
Respect, power, and easy women whenever I want. I have control in everything I do.
Because of that, I wasn’t expecting my president to put me on babysitting duty, and on a female cop of all fucking people. I kill law enforcement, not protect them.
Alessandra pretends to be the good-guy hiding behind that shiny badge. But I see the darkness dancing in her eyes, and it draws me to her in the worst way. I want to devour that act of innocence, pull her over the line of justice, and into my bed.
I just wasn’t expecting the handful of secrets I got behind that badge of honor I ripped from her chest.  Because now, we’re retaliating against a common enemy together.

M.N. Forgy's "Retaliate" is the third tale in the Sin City Outlaws series. Alessandra became a cop after her dad. Felix is the Vice President of the Sin City Outlaws. Felix has been picking up the slack since Zeek doesn't want to be away from Jillian since she is pregnant with his twins. What happens when the whole club is threatened and that includes Alessandra because of Jillian? Felix gets put on babysitting duty, which he doesn't like since she's a cop. Can a cop and a dirty biker get along, or will they fight to kill. Find out in this awesome read!!! 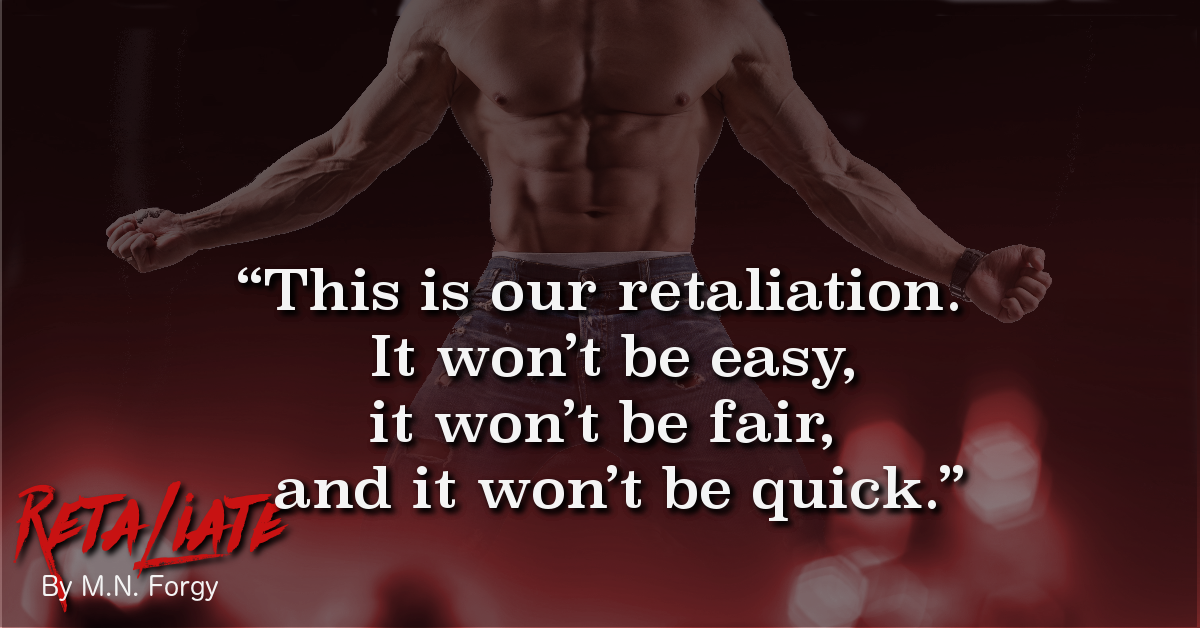 “So, you came here to what, let loose?” I ask suggestively, lust hanging from the tip of my tongue.
She looks up through hooded eyes, her hands fidgeting with the hem of her shirt.
Taking a small step, I invade her space. Using my finger, I tuck it firmly under her chin making her look me in the eyes. God, she’s so fucking soft to touch, my hands itch to take advantage of her body and soul. That’s what I do, I devour innocent women, and scar their souls to the point they’re damaged goods.
“Were you going to fuck one of my men tonight, Alessandra?” I ask hastily.
Her throat bobs as she swallows, fire igniting her eyes as she pulls away. She’s a pistol and not the kind you love and shine every day with care. More like the kind you’re scared to use because it may backfire on you at any minute.
“So what if I was? Why do you care?” She raises a challenging brow, her voice sharp. A burning sensation combusts in my chest thinking about her riding one of my guy’s dicks.
“I forbid you to open your legs to any of my brothers, do you understand?” My rash decision comes from an unknown place. An insatiable hunger beading at the tip of my dick.
Her jaw drops, and her hands curl into fists.
“Who do you think you are to dictate who I screw?” she scowls.
My temples pound with annoyance and anger, done with this back and forth.
Leaning down my lips a hair’s length away from her face, I intimidate her to the point she looks away and purses her lips.
“Maybe you didn’t get the memo, Blue Bird, but now that Zeek is playing daddy… I run this fucking city. Therefore, I say who you fuck, and don’t fuck.”
Her chocolate eyes snap to mine, and I know I have her full attention. Which I want, I want her to look at me, to really see me. All of me. 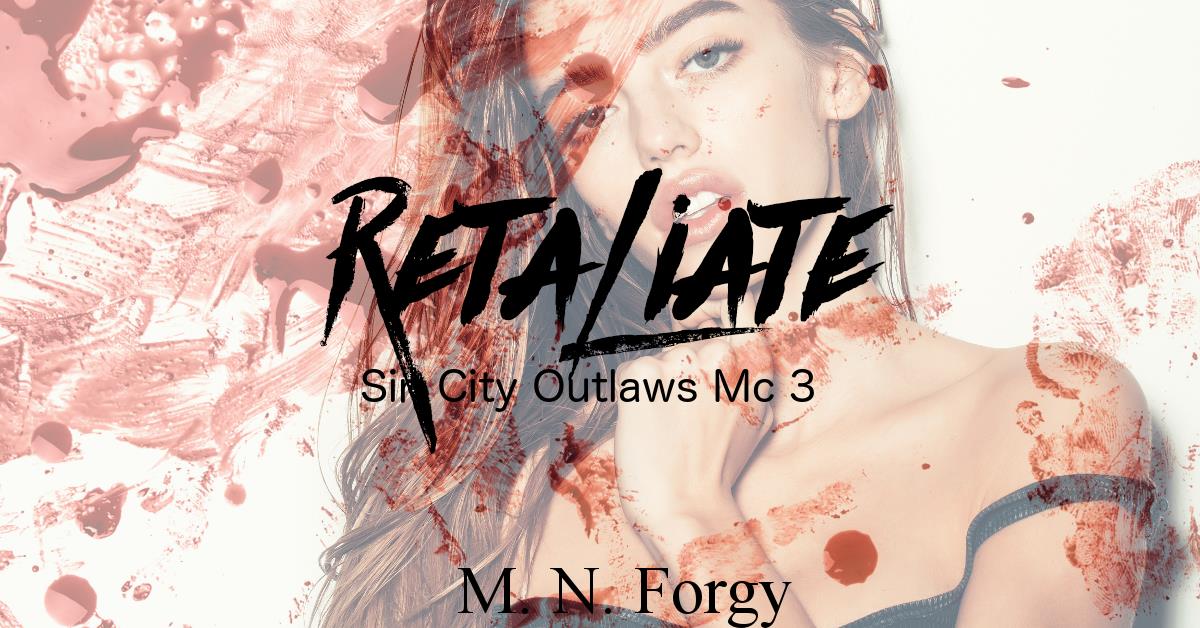 M.N. Forgy's "Reign" is the first tale in the Sin City Outlaws series. Zeek is the Vice President of the Sin City Outlaws, an outlaw MC in Las Vegas, Nevada. His dad has been arrested and people keep being taken down while he's away. His uncle and him come up with a plan to take him down in jail so maybe more won't go down. Zeek then takes over as president and all goes quiet, well quiet for them. They still raise hell in sin city. Jillian Adams is a rookie with the Clark County Sheriff's and is out on the road with her step-dad Lieutenant Oaks when they are called to a disturbance at a casino. Of course it had to be the Sin city Outlaws raising hell. Jillian of course goes to arrest Zeek for the blood staining his skin and his bloody hands. Lt. Oaks tries to stop her. Zeek and Jillian have words before Lt. Oaks talks her into leaving Zeek alone. Zeek and Jillian's words have sparked something in the other one leaving them think of the what if's, that if they weren't a cop and an outlaw. Follow them as their lives twist and turn and see if sparks can fly with an outlaw and a cop. This is a MUST READ!!!!

M.N. Forgy's "Mercy" is the second tale in the Sin City Outlaws series. Jillian and Zeek are on the run from the Las Vegas police and the Sin City Outlaws, headed up by Zeek's Uncle Frank. He made Zeek shoot Jillian's step dad then they fled the city and eventually the state. They were headed to Los Angeles where Zeek's little brother, Phillip is. Phillip belongs to the Devil's Dust MC and they're not friendly with The Sin City Outlaws or Zeek. They steal a truck from an out of the way house and leave the patrol car behind. Jillian keeps trying to get away from Zeek with no luck. He's been keeping her cuffed so she can't run. They end up running out of gas and head to a motel where they take a older couple hostage for food, a shower and a place to crash for the night. The couple ends up helping them and giving Jillian clothes and they steal a car and head to LA. Zeek contact one of his former dealers and gets a place to crash for a few days until they can get to Lip. When they get to the Devil's Dust all hell breaks loose and Lip almost kills Zeek as retribution for their altercation a few months before when Zeek killed one of their members. The FBI busts in and Zeek and Jillian hide in the attic, but not well enough. One of Jillian's former co-workers is there to take her in but then hands her off to Frank and goes back to Vegas. Zeek and the Devil's Dust make a deal and go after her. The fight that ensues goes awry when Frank tells Zeek that Jillian is pregnant and he will never see the kid of Jillian again. Find out what happens in this crazy wild ride!!!!

M.N. Forgy was raised in Missouri where she still lives with her family. She's a soccer mom by day and a saucy writer by night. M.N. Forgy started writing at a young age but never took it seriously until years later, as a stay-at-home mom, she opened her laptop and started writing again. As a role model for her children, she felt she couldn't live with the "what if" anymore and finally took a chance on her character's story. So, with her glass of wine in hand and a stray Barbie sharing her seat, she continues to create and please her fans.