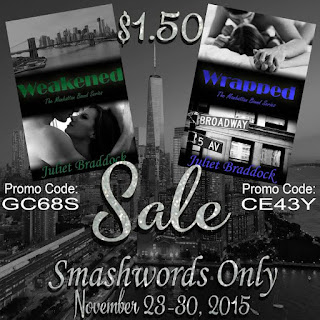 Against the glittering backdrop of New York City, budding theatrical publicist Maxine Kirk, fresh off the bus from a small Pennsylvania town, stumbles into the arms of her beloved teenage crush, unleashing desires that she never imagined.
Enter Drew McKenzie, a rising star on Broadway with dashing looks and talent to match, who masquerades behind the characters he portrays.
Instantly, Maxine finds herself lured into Drew’s high society world only to uncover a complicated man beneath the glitz and glamour of his public persona. As soon as the curtain falls, Drew sheds his stage costumes to reveal a daring Dominant side.
Titillated by his enigmatic life, Maxine clamors to discover a surreptitious and possibly perilous affair with Drew, all the while questioning her own preconceived notions on romance.
Secrets surface, revealing haunting truths that test both Maxine and Drew of their own intentions. But in this high-stakes game of trust, only the strongest survive.

"Juliet’s writing style is just flawless and, ever since I began her book, I wasn’t able to stop. She managed to create a striking story that lures you in, with characters that seem so real, I felt like I knew every one of them."
~ Mikky's World Of Books

Sweeping through the glitz and glamour of New York’s high society and the drama unfolding in the dressing rooms of Broadway, Wrapped, by Juliet Braddock, continues the journey of a young theatrical publicist’s foray into submission under the tutelage of a dashingly dark star of the stage. Wrapped—the much anticipated sequel to Braddock’s critically acclaimed erotic romance Weakened—is the second book in the Manhattan Bound series.
When Drew McKenzie presents Maxine Kirk with an ultimatum, challenging her to engage in his wanton brand of desire, she readily embraces her awakening hunger for a lifestyle that defies her perceptions of romance.
Entranced by Drew’s charming appeal and by his sensual assault to her senses, Maxine clamors to discover every nuance of this new relationship, ravenous to explore verboten fantasies that seem possible to fulfill only with Drew.
Along the way, he introduces her to his glamorous world of wealth and celebrity—where lavish galas and luxurious gifts are the norm—and entices her into his realm of control with his tender mode of domination.
All the while, however, they both grapple with painful emotions brought about by the extenuating circumstances of their separate pasts.
While Drew remains both confident and conscientious in his parlay of power over Maxine, his own tragic secret lurks in every shadow upon his path in life. Behind the façade of his stage persona and the origin of old Manhattan society, he struggles to hide the unforgiving reality he faced as a child.
Just as Maxine finds the strength to conquer her own torment with Drew’s patience and guidance leading her toward closure, terrifying truths begin to chip away at the surface of his composure.
As the nightmarish details of Drew’s unimaginable life emerge, he fears that this new world he’d begun to build with Maxine will crumble around him.
As Maxine finds herself embroiled in the battle to save Drew’s tortured soul from the atrocities that continue to stalk his every move, two lost souls struggling to find comfort and completion converge.
However, as Drew opens his heart to Maxine’s unwavering support, he questions his own bravery, wondering if she’ll take a bow and make her exit…or if she’ll stick around for the encore?

"An incredibly emotive read that will move with sadness, have you cheering with happiness with the successes, laughing out loud and much more."
~LBM Book Blog