Review for Allyson Lindt's The Nerds and The CEO 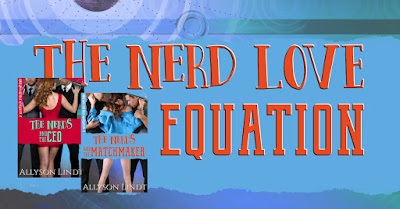 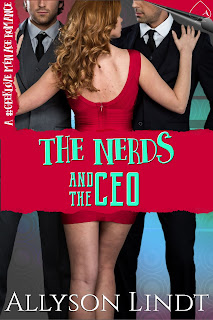 Release Day For The Nerds and The CEO

As long as Antonio has Justin and the Silicon Valley start-up they built together, Antonio’s content to hide his true feelings. He’d rather keep Justin’s friendship than confess his love and lose everything.

Allyson Lindt's "The Nerds and the CEO" is the first tale in The Nerd Love Equation series. The characters are very well-written, as usual with Allyson Lindt. Emily is an amazing leading lady and holy smokes Justin and Antonio are hawt! This story feels like a fugue with escalating themes...such a great set of developments in this storyline. The sexy scenes are scorching hot! I just love these nerdy love stories! I can't wait to read the whole series!

Antonio glanced at Emily and did a double-take at the tease of satin. She wore a green nightgown trimmed with lace. The brilliant emerald matched her eyes, and the black was a stunning contrast to her pale skin. “You two do this a lot?” she asked.
She stood next to him in the doorway, while Justin slept on one of his office couches. It was one of the few times Antonio had seen him recently without stress lining his face.

“We used to.” He couldn’t force his gaze to her face. Her breasts were pressed together and up, swelling with each breath, and her negligee barely covered her ass. As the blood rushed from his head and to his lower extremities, he struggled to find the brain power to speak. “I’d be happy if we never had to do it again, but it’s worth it, if things pay off.”

His mind caught up before his mouth ran too far, and he stopped himself from mentioning their side project. “You know what things.” He kept his tone light and playful. “Same you’re here for.”

“Then you should have let me help.” She shifted her weight, giving him a generous view of cleavage. A trail of freckles ran along her collarbone, ending in a V at her neckline, as if the sun had planted each one.

He needed to distract her from the subject. That would put them on an equal playing field. “You and him.” Antonio nodded at Justin’s sleeping form. “How was it?” A tiny portion of him knew the question was inappropriate, but it made as much sense as Emily standing in the middle of the office in lingerie. What the hell—he was going with it.

“Hmm.” She twisted her full lips, and his cock throbbed. “Are you asking how I was, or how he was? The answer to the latter—incredible. Everything you’ve dreamed of.”

He’d dreamed of a lot. “What if I wanted the answer to the former as well?”

“You’d have to ask Justin.”

Antonio dragged a finger along her jaw, to her chin, to lift her head. “I’d rather find out for myself.”

Purchase The Nerds and The CEO 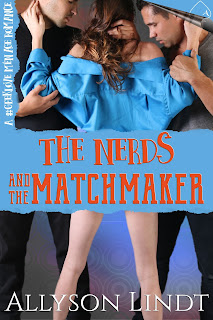 The Nerds and The Matchmaker