Review for Her Cyborg Beast by Grace Goodwin 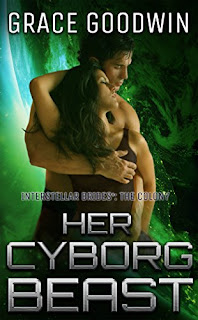 Caroline Jane (CJ) Ellison has a gift for analysis. When a Wall Street deal goes bad, the choice between prison or the Interstellar Brides Program is a no-brainer. She'll go. She'll leave Earth, her past, and her mistakes behind. The decision is logical, not emotional. Until she wakes up on another world with a huge Atlan Warlord, her matched mate, refusing to claim her.
Warlord Rezzer is contaminated. Weak. The Hive captured him and stole his soul, his very beast. A mate is out of the question when he can't become what he was born to be, a beast, her mate, her protector. Forced into the Brides Program testing against his will, Rezzer has no intention of claiming the beautiful, sassy female who arrives on the Colony. The Hive stole his beast, but not his honor. He vows to give her to another, a worthy male, a beast who is whole -- one not hunted by the Hive as part of a dangerous new experiment to win the war.
CJ takes one look at the wounded warrior before her and knows she will never be able to let him walk away. He's hers now, her perfect match. And if that means she has to seduce the beast or face off with the Hive to save him...that's exactly what she's going to do. She lived her life following the rules. With everything on the line, it's time to break them.

Grace Goodwin's "Her Cyborg Beast" is the the fourth tale in the Interstellar Brides, The Colony series. You can read it as a standalone, but you will want to read all of the other books too. Grace Goodwin has written a zillion of these books, but no two feel the same - that's amazing. This one has the neat element that Rezzer has had his sex drive deactivated! CJ is another tough leading lady. Love, love, love. I just one-click everything I see from Grace Goodwin.


My Reviews for Other Tales in the Series


Grace Goodwin's "Mated to the Cyborgs" is the second tale in the Interstellar Brides, The Colony series. I love this author! You can read this as a standalone but I will definitely go back and read #1 and the related series. Tyran and Hunt are perfect dark and light complements. I like that Kristin is such a strong leading lady. Can't wait to read more Grace Goodwin!

Grace Goodwin's "Cyborg Seduction" is the third tale in the Interstellar Brides: The Colony series, but it is a great standalone read. Lindsey isn't like the other interstellar brides. She didn't sign on for this and she isn't ready to move across space to be with her match. This one has a different feel than all of the others and I really liked it. Kiel is so, so, so hot! Amazing sexy scenes as usual! I liked the ending so much. Sweet and super sexy too!

Interested in joining my not-so-secret Sci-Fi Squad? Get excerpts, cover reveals and sneak peeks before anyone else. Be part of a closed Facebook group that shares pictures and fun news.
JOIN Here: http://bit.ly/SciFiSquad

All of Grace's books can be read as STAND ALONE novels. Her Happily-Ever-Afters are always free from cheating because she writes Alpha males, NOT Alphaholes. (You can figure that one out.) But be careful...she likes her heroes hot and her love scenes hotter. You have been warned...

About Grace:
Grace Goodwin is an international bestselling author of Sci-Fi & Paranormal romance. Grace believes all women should be treated like princesses, in the bedroom and out of it, and writes love stories where men know how to make their women feel pampered, protected and very well taken care of. Grace hates the snow, loves the mountains (yes, that's a problem) and wishes she could simply download the stories out of her head instead of being forced to type them out. Grace lives in the western US and is a full time writer, an avid romance reader and an admitted caffeine addict. 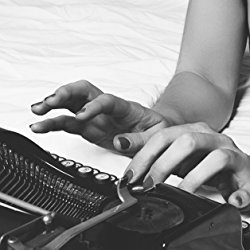